Chandler is a city in, and the county seat of, Lincoln County, Oklahoma, United States. and is part of the Oklahoma City Metropolitan Area. The population was 3,100 at the 2010 census, an increase over the figure of 2,842 in 2000.

Chandler is located northeast of Oklahoma City on SH-66 and I-44, and north of Shawnee on SH-18.

Chandler was named after Judge George Chandler, a member of Congress and Assistant Secretary of the Interior. The site of Chandler was opened by a land run on September 28, 1891. The town had been planned to be opened on September 22, (the date of the Land Run of 1891) but the site survey had not been completed. The Chandler Post Office had opened September 21, the day before the planned run. When Oklahoma Territory County A (Lincoln County) was organized, Chandler became the county seat. On May 30, 1897, a tornado destroyed most of the fledgling town and killed 14 residents.

The St. Louis and Oklahoma City Railroad (later the St. Louis and San Francisco Railway, also known as the "Frisco") built a line through Chandler in 1898. The railroad enabled Chandler to move its agricultural products, as well as bricks made by the Chandler Brick Company. to markets.

Chandler is one of the many cities along the famous U.S. Route 66 and contains a number of attractions to devotees of "The Mother Road." These include The Route 66 Interpretive Center, The Oklahoma Law Enforcement Museum and Hall of Fame, The Lincoln County Museum of Pioneer History, several Route 66-themed murals, the newly restored old cottage-style Phillips 66 gas station, and one of the last remaining painted barns adverting Meramec Caverns, also on Route 66 in Missouri.

U.S. Route 66 brought a significant amount of commercial business to Chandler - due to travelers crossing the state and the country; however when the Turner Turnpike (Interstate 44) was built, much of this business died out.

In 1949, the Oklahoma legislature declared Chandler to be, "The pecan capital of the world," in Resolution No. 5.

In 1958, professional baseball player Bo Belcher opened Chandler Baseball Camp. For 42 years, the camp hosted campers from around the world for a bootcamp-like baseball camp during summers. The camp closed in 2000 due to the death of Tom Belcher. In 2011 it was added to the National Register of Historic Places.

Of all households, 31.2% had children under the age of 18 living with them, 47.1% were married couples living together, 14.0% had a female householder with no husband present, and 34.8% were non-families. 32.1% of all households were made up of individuals, and 17.3% had someone living alone who was 65 years of age or older. The average household size was 2.36 and the average family size was 2.98. 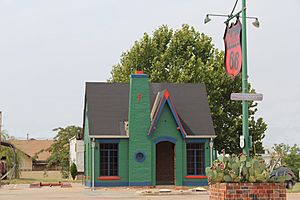 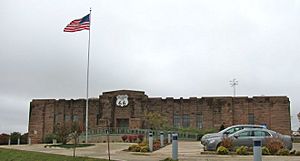 Today, Chandler's economy is driven mostly by agriculture and livestock, oil and gas services, and manufacturing. The National American Insurance Company is headquartered in Chandler. Downtown Chandler, which is located on historic Route 66 and is home to many shops and restaurants. Lincoln County's first Wal-Mart Supercenter opened in 2008 on the east side of Chandler.

Chandler and the surrounding area is served by the Chandler Public School District. The Chandler High School Alumni Association describes itself as "the oldest and most active" in the state.

All content from Kiddle encyclopedia articles (including the article images and facts) can be freely used under Attribution-ShareAlike license, unless stated otherwise. Cite this article:
Chandler, Oklahoma Facts for Kids. Kiddle Encyclopedia.