Chapin, popularly known as the capital of Lake Murray, is a small, affluent lake town located at the northern tip of Lexington County, South Carolina bordering Newberry County, South Carolina to the south. Lake Murray separates Chapin from the rest of Lexington County. Chapin is located approximately 22 miles northwest of Columbia and many people commute there for work, however, the town is considered fringe rural by the US postal service. Chapin is known for its charm and southern hospitality and is consistently rated in the Top 10 places to live in South Carolina. Chapin was founded by Martin Chapin in 1889. The following year, 1890, the railroad was built to connect Chapin to Columbia, South Carolina and other major regions. The population of Chapin was 1,445 according to the 2010 census, however, the population of the area with a Chapin mailing address, which is all known as Chapin by local people, is 6,742. kno. The town government is set up in the Mayor-Council form and the current Chapin mayor is J. Robert (Skip) Wilson. Chapin has four public schools in the area; the first Chapin school was built in 1924. Lake Murray is the main attraction to Chapin, South Carolina and provides recreational boaters with water-related entertainment.

While Chapin is a part of Lexington County, the creation of Lake Murray, South Carolina by the Dreher Shoals Dam cut Chapin off from the rest of the county, creating something of an exclave.

Chapin is named after Martin Chapin who traveled south from Cortland, New York. After Martin Chapin and Laura Anne Benjamin were married on June 16, 1850, the couple moved down South because of Martin’s health (a lung condition). The Chapins were living in Columbia, South Carolina when Martin's doctor suggested he to move to the Piney Woods area. He bought property in this area, and over the years Chapin bought 4,218 acres. He built a home in Piney Woods and later a hotel in the 1880s along the new rail line that ran from Columbia, South Carolina to Laurens, South Carolina.The railroad provided a way to trade and transport goods to the capital city. Cotton and the lumber industry were flourishing with the railroad providing transportation . After Martin’s death on August 31, 1894, Laura Chapin sold their Chapin home and moved into the Chapin hotel.

On March 28, 1907, Job S. Wessinger, P.M. Frick, and J. S. Honeycut founded the Bank of Chapin. One year later the building for the bank was built. The bank prospered with help from the railroad.

During World War I, Chapin was doing well economically. The price of cotton had risen and the farmers were making plenty of money. As a result, The Bank of Chapin was also thriving during this time. In addition, the first high school was built in 1924.

Slowly the businesses in Chapin were starting to experience hard times nearing the 1930s. On Thursday, October 15, 1931 the Bank of Chapin did not open, and like other banks around the world, the Bank of Chapin would not allow customers to withdraw their money. Anybody who had money saved in the bank lost that money due to the crash of the stock market, later known as the start of the Great Depression. Another disaster to hit Chapin was the building of the dam on the Saluda River that would result in the building of a lake. This lake would take over most of the Chapin families’ farm and homeland. The building of the dam was started in 1927.

In the midst of the Great Depression Chapin started a recreational team sport of baseball. In 1935, the Dutch Fork League was formed where Chapin had its own team. This team helped the unemployed men occupy their time during these difficult times. These baseball games attracted thousands of people.

The midpoint in Chapin’s history is the 1940s. During this period Chapin grew through improvements on the school and opening new businesses. One new business that came to Chapin was filling stations. The next business was a cabinet shop called E. A. Frick and Son. Chapin also built paved roads, a baseball field and established the public library. In 1950 the first post office building was constructed, along with new telephone services.

The 1960s were about new and better services. Garbage collection was an issue in the 60s, so the town government bought land and built a landfill. Transportation was the next service provided by access to an interstate. On September 7, 1960 a section of the interstate was opened between Columbia and Pomaria, South Carolina. The interstate made Chapin more accessible. Streets in town were also improved. Another improvement of the 60s was the new water system. Later during 1965 a volunteer fire department was organized. Then in 1966, the town had its first ambulance. Chapin also started growing in population as more people moved to Chapin in the 1960s.

During the 1970s new schools were built. Chapin football also became a community event because the school football team won two state championships in 1973 and 1974. Also in the 70s churches in the town of Chapin were growing by establishment of Chapin Baptist Church, St. Francis of Assisi Episcopal Church, Our Lady of the Lake Catholic Church, and Lake Murray Presbyterian Church.

The Robinson-Hiller House was listed on the U.S. National Register of Historic Places in 1998.

According to the 2000 Census, the incorporated limits of the Town of Chapin had a population of 628. The census counted 249 occupied housing units within the town. Per capita income was $24,124. Median household income within the town limits was $48,750.

The 2010 Census, records that Chapin has a population of 1,445 with 658 total housing units within town limits. 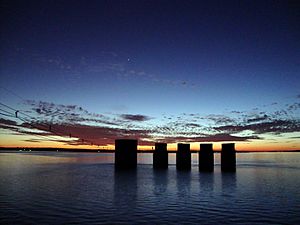 Chapin is often referred to as the capital of Lake Murray. On September 21, 1927, work on the dam for the Saluda River was started. The construction finished on the June 30, 1930. Chapin families who had lived on Chapin land for over 200 years had to sell and move to make room for the lake that was a result of the dam. The lake was to spread between Dutch Fork and Chapin becoming 14 miles wide and 40 miles long.

The earthen dam stands over 200 feet tall and runs 1.5 miles across. Lake Murray has over 500 miles of shoreline and covers approximately 50,000 acres. The dam itself takes up 99 acres.

The dam on Lake Murray has been through many changes since it was originally built in 1927. In 1943 three feet was added to the dam’s height to help flooding issues. Much later in the 1980s SCE&G added a sheet piling way on the lakeside of the highway again to help with flooding. This sheet piling way raised the height of the dam again.

Lake Murray is not only used to provide electrical power for surrounding areas, it brings boating activities to the affluent town of Chapin. Lake Murray offers many different types of boating opportunities in addition to recreational areas. Today, the lake has recreational swimming, boating, skiing, fishing, and wake-boarding. The lake also holds fishing tournaments and is home to all kinds of wildlife. Lake Murray is known for its purple martins, striped bass, and great blue heron.

Chapin is home to the Chapin Labor Day Festival. The Chapin Labor Day Festival is held every year in the town of Chapin on Labor Day. The festival lasts for three days starting on the Saturday before Labor Day and ending on Labor Day. On Monday, the festival activities start off with a parade through town and often features local, state and sometimes national political candidates. The Chapin High School three time national champion NJROTC also marches in the parade annually. After the parade there is a carnival, Chapin Idol, vendors, food, concerts, and a car show along the historic streets of downtown Chapin.

Has 6 tennis courts, racquetball, 27-hole disc golf course, a basketball and weightlifting gym with an indoor walking track and meeting rooms, 6 baseball and soccer fields, and a paved walking trail through the woods. Opened in 1994.

All content from Kiddle encyclopedia articles (including the article images and facts) can be freely used under Attribution-ShareAlike license, unless stated otherwise. Cite this article:
Chapin, South Carolina Facts for Kids. Kiddle Encyclopedia.