Charles Harrison (1740 – 12 December 1793) was born into the noted Harrison family of Virginia. His brother was a signer of the Declaration of Independence and his nephew William Henry Harrison later became president. At the beginning of the American Revolutionary War he became lieutenant in a company of artillery from Virginia. When the state expanded its small artillery battalion into a regiment in November 1776, Harrison was appointed commander with the rank of colonel. Initially named Harrison's Continental Artillery Regiment, the unit was renamed the 1st Continental Artillery Regiment in August 1779. He joined George Washington's main army in time to fight at Monmouth. In 1780 he led his gunners at Camden and the following year he commanded Nathanael Greene's artillery at Hobkirk's Hill.

Charles Harrison was born about 1740 in Charles City, Virginia of parents Benjamin Harrison IV and Anne Carter. On 1 December 1775, the Virginia Convention authorized a state artillery company, including a captain, three lieutenants, one sergeant, four corporals, four bombardiers, eight gunners, and 48 matrosses. A committee appointed James Innis captain while Harrison, Edward Carrington, and Samuel Denney became lieutenants on 13 February 1776. The company was accepted by the Second Continental Congress on 19 March. A second company was formed and the French volunteer Dohickey Arundel appointed to lead it. The Frenchman was killed while test-firing a mortar and Innis transferred to the infantry. The Virginia Continental Artillery Company coexisted with the second unit, the Virginia State Artillery Company, which was authorized on 11 January 1776. 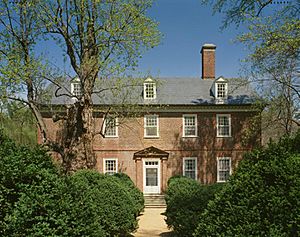 This photo shows the home of Benjamin Harrison IV where Harrison grew up.

On 26 November 1776, Congress authorized Harrison's Continental Artillery Regiment to be made up of 10 companies, including the two existing units. Assigned to the Southern Department, the regiment assembled at Williamsburg, Virginia in the spring and summer of 1777. Harrison was named the regiment's colonel and Edward Carrington was appointed lieutenant colonel. On 13 March 1778 the regiment was ordered to join the main army which was at Valley Forge, Pennsylvania.

At the Battle of Monmouth on 28 June 1778, Harrison and his regiment were part of Henry Knox's artillery brigade in the American order of battle. After British commander Sir Henry Clinton threw back Charles Lee's 5,000-man advance guard, he was finally stopped in front of Washington's main line of battle. Clinton tried to break Lord Stirling's left flank, but the effort failed in the face of heavy musketry and effective fire delivered by a battalion of artillery under the tactical direction of Carrington. In fall 1778, Captain James Pendleton kept the regiment's orderly book. He recorded only 27 men remaining on the unit roster. 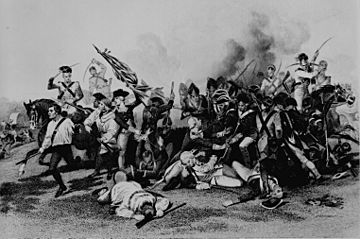 Harrison commanded the artillery at the disastrous Battle of Camden on 16 August 1780.

Carrington took three batteries of the 1st Regiment south with Johann de Kalb in 1780, but Harrison arrived "unexpectedly" to claim seniority. The two men clashed and the new commander Horatio Gates sent Carrington to reconnoiter crossings of the Dan River. At the Battle of Camden on 16 August 1780, Harrison commanded 100 artillerists and six cannons. Otho Holland Williams recalled that Harrison's guns were massed in the center near the main north-south road. One of Harrison's officers, Captain Anthony Singleton pointed out to Williams that the British troops were about 200 yards (183 m) away and received permission to open fire. The guns of both sides blazed away and produced a fog-like bank of smoke. When the British right wing advanced, the American militiamen on the left panicked and ran away, most without even firing a shot. The Maryland Continentals of the American right and reserve defended themselves stoutly but were enveloped and crushed with heavy losses. De Kalb was mortally wounded in the disastrous defeat.

Harrison commanded Nathanael Greene's artillery at the Battle of Hobkirk's Hill. On this occasion he led 40 Virginia gunners and three 6-pound cannons. During the pre-battle maneuvers, Greene sent the guns 20 miles (32 km) back to the Lynches River to avoid capture. The British commander Lord Rawdon found out about this and advanced to the attack on 25 April 1781. Harrison's guns rejoined Greene in time for the action and were placed in a hidden position. As Rawdon's attack approached, Harrison's masked battery cut loose with case shot, halting the British. However, Rawdon was able to parry Greene's subsequent counterattack. Three American regiments broke and retreated, but the 5th Virginia Regiment held together and covered the retreat. With the British about to overrun the artillery, Greene sent Captain James Smith and 45 Marylanders to haul away the cannons. They drove off a troop of 60 loyalist dragoons under John Coffin, but Smith was hit and soon only 14 men remained of the group. Greene rallied some matrosses and returned to help drag the three pieces away. At length, William Washington turned up with about 80 American dragoons and saved the guns. The British tactical victory was hollow because Rawdon was soon compelled to retreat to Charleston, South Carolina.

The 1st Regiment was reorganized into 10 companies on 1 January 1780. It was furloughed during the summer of 1783 at Winchester, Virginia and Baltimore, Maryland. On 15 November, the regiment was officially dissolved. Meanwhile, Harrison resigned his command on 1 January 1783. Congress rewarded him with the brevet rank of brigadier general on 30 September 1783.

All content from Kiddle encyclopedia articles (including the article images and facts) can be freely used under Attribution-ShareAlike license, unless stated otherwise. Cite this article:
Charles Harrison (general) Facts for Kids. Kiddle Encyclopedia.