Charles Richard Drew (June 3, 1904 – April 1, 1950) was an American surgeon and medical researcher. He researched in the field of blood transfusions, developing improved techniques for blood storage, and applied his expert knowledge to developing large-scale blood banks early in World War II. This allowed medics to save thousands of lives of the Allied forces. As the most prominent African American in the field, Drew protested against the practice of racial segregation in the donation of blood, as it lacked scientific foundation, and resigned his position with the American Red Cross, which maintained the policy until 1950.

Drew was born in 1904 into an African-American middle-class family in Washington, D.C. His father, Richard, was a carpet layer and his mother, Nora Burrell, trained as a teacher. Drew and three of his four younger siblings grew up in Washington's largely middle-class and interracial Foggy Bottom neighborhood. From 1920 until his marriage in 1939, Drew's permanent address was in Arlington County, Virginia, although he graduated from Washington's Dunbar High School in 1922 and usually resided elsewhere during that period of time.

Drew won an athletics scholarship to Amherst College in Massachusetts, from which he graduated in 1926. An outstanding athlete at Amherst, Drew also joined Omega Psi Phi fraternity as an off-campus member; Amherst fraternities did not admit blacks at that time. After college, Drew spent two years (1926–1928) as a professor of chemistry and biology, the first athletic director, and football coach at the historically black private Morgan College in Baltimore, Maryland, to earn the money to pay for medical school.

Drew attended medical school at McGill University in Montreal, Quebec, Canada, where he achieved membership in Alpha Omega Alpha, a scholastic honor society for medical students, ranked second in his graduating class of 127 students, and received the standard Doctor of Medicine and Master of Surgery degree awarded by the McGill University Faculty of Medicine in 1933.

Drew's first appointment as a faculty instructor was for pathology at Howard University from 1935 to 1936. He then joined Freedman's Hospital, a federally operated facility associated with Howard University, as an instructor in surgery and an assistant surgeon. In 1938, Drew began graduate work at Columbia University in New York City on the award of a two-year Rockefeller fellowship in surgery. He then began postgraduate work, earning his Doctor of Science in Surgery at Columbia University. He spent time doing research at Columbia's Presbyterian Hospital and gave a doctoral thesis, "Banked Blood," based on an exhaustive study of blood preservation techniques. He earned a Doctor of Science in Medicine degree in 1940, becoming the first African American to do so.

In late 1940, before the U.S. entered World War II and just after earning his doctorate, Drew was recruited by John Scudder to help set up and administer an early prototype program for blood storage and preservation. He was to collect, test, and transport large quantities of blood plasma for distribution in the United Kingdom. Drew went to New York City as the medical director of the United States' Blood for Britain project. The Blood for Britain project was a project to aid British soldiers and civilians by giving U.S. blood to the United Kingdom.

Drew started what would be later known as bloodmobiles, which were trucks containing refrigerators of stored blood; this allowed for greater mobility in terms of transportation as well as prospective donations.

Drew created a central location for the blood collection process where donors could go to give blood. He made sure all blood plasma was tested before it was shipped out. He ensured that only skilled personnel handled blood plasma to avoid the possibility of contamination. The Blood for Britain program operated successfully for five months, with total collections of almost 15,000 people donating blood, and with over 5,500 vials of blood plasma. As a result, the Blood Transfusion Betterment Association applauded Drew for his work.

Out of Drew's work, he was appointed director of the first American Red Cross Blood Bank in February 1941. The blood bank being in charge of blood for use by the U.S. Army and Navy, he disagreed with the exclusion of the blood of African-Americans from plasma-supply networks. In 1942, Drew resigned from his posts after the armed forces ruled that the blood of African-Americans would be accepted but would have to be stored separately from that of whites.

In 1941, Drew's distinction in his profession was recognized when he became the first African-American surgeon selected to serve as an examiner on the American Board of Surgery.

Drew had a lengthy research and teaching career, returning to Freedman's Hospital and Howard University as a surgeon and professor of medicine in 1942. He was awarded the Spingarn Medal by the NAACP in 1944 for his work on the British and American projects. He was given an honorary doctor of science degree, first by Virginia State College in 1945 then by Amherst in 1947. 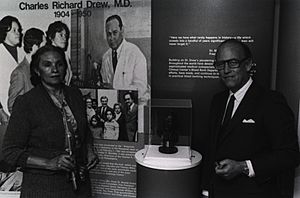 Minnie Lenore Robbins with NIH Director, Donald Frederickson, unveiling of bust and exhibit of her husband, 1981

In 1939, Drew married Minnie Lenore Robbins, a professor of home economics at Spelman College in Atlanta, Georgia, whom he had met earlier during that year. They had three daughters and a son. His daughter Charlene Drew Jarvis served on Council of the District of Columbia from 1979 to 2000, was the president of Southeastern University from 1996 until 2009 and was a president of the District of Columbia Chamber of Commerce. 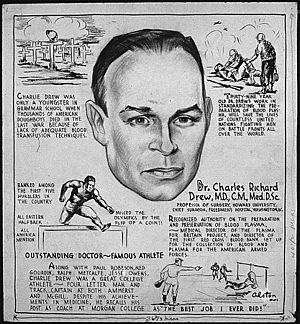 Beginning in 1939, Drew traveled to Tuskegee, Alabama to attend the annual free clinic at the John A. Andrew Memorial Hospital. For the 1950 Tuskegee clinic, Drew drove along with three other black physicians. Drew was driving around 8 a.m. on April 1. Still fatigued from spending the night before in the operating theater, he lost control of the vehicle. After careening into a field, the car somersaulted three times. The three other physicians suffered minor injuries. Drew was trapped with serious wounds; his foot had become wedged beneath the brake pedal. When reached by emergency technicians, he was in shock and barely alive due to severe leg injuries.

Drew was taken to Alamance General Hospital in Burlington, North Carolina. He was pronounced dead a half hour after he first received medical attention. Drew's funeral was held on April 5, 1950, at the Nineteenth Street Baptist Church in Washington, D.C.

All content from Kiddle encyclopedia articles (including the article images and facts) can be freely used under Attribution-ShareAlike license, unless stated otherwise. Cite this article:
Charles R. Drew Facts for Kids. Kiddle Encyclopedia.