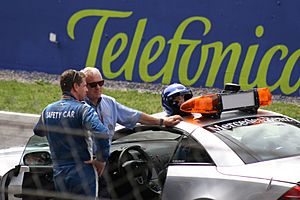 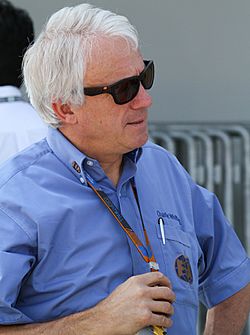 Whiting at the 2010 Japanese Grand Prix

Charles Whiting (12 August 1952 – 14 March 2019) was a British motorsports director. He served as the FIA Formula One Race Director, Safety Delegate, Permanent Starter and head of the F1 Technical Department. He mostly managed the logistics of each F1 Grand Prix, inspects cars before a race, enforces FIA rules, and controls the start of each race. He was born in Sevenoaks, Kent.

Whiting's first job was assisting his brother Nick in preparing race cars near the Brands Hatch racing circuit in England. In 1977, he joined Hesketh Racing at Easton Neston, near Silverstone. When the team folded, he joined Bernie Ecclestone's Brabham team. He become the chief mechanic for Nelson Piquet in 1981 and 1983 seasons. He later became chief engineer.

In 1988, he became technical delegate to the FIA Formula One and in 1997 he was appointed FIA Race Director and Safety Delegate.

During the 2005 United States Grand Prix, Whiting was involved in a tyre controversy. None of the tyres which Michelin had brought to Indianapolis were safe to use. Michelin was unable to produce new tyres to replace the seven teams' unsafe tyres. Michelin asked Whiting to install a chicane in Turn 13 of the Indianapolis Motor Speedway instead. Whiting refused to make the change. He said this would be unfair to the teams who were able to race safely on the existing track.

On 14 March 2019, Whiting died of a pulmonary embolism in Melbourne, Victoria, Australia. He was 66.

All content from Kiddle encyclopedia articles (including the article images and facts) can be freely used under Attribution-ShareAlike license, unless stated otherwise. Cite this article:
Charlie Whiting Facts for Kids. Kiddle Encyclopedia.