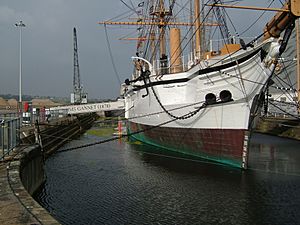 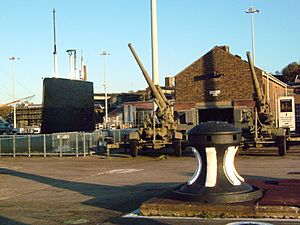 HMS Ocelot on display, with an anti-aircraft gun to the right as part of a display on the Dockyard and the V1 rocket. 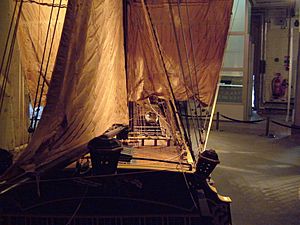 Model of HMS Victory, on display in the Museum of the Royal Dockyard. 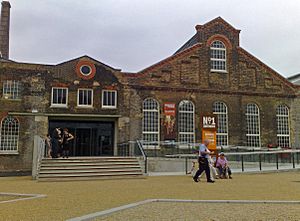 Chatham Historic Dockyard is a maritime museum on part of the site of the former royal/naval dockyard at Chatham in Kent, South East England.

Chatham Dockyard covered 400 acres (1.6 km²) and was one of the Royal Navy's main facilities for several hundred years until it was closed in 1984. After closure the dockyard was divided into three sections. The easternmost basin was handed over to Medway Ports and is now a commercial port. Another slice was converted into a mixed commercial, residential and leisure development. 80 acres (324,000 m²), comprising the 18th-century core of the site, was transferred to a charity called the Chatham Historic Dockyard Trust and is now open as a visitor attraction. It claims to be the world’s most complete dockyard of the Age of Sail.

The attraction has seven main elements: 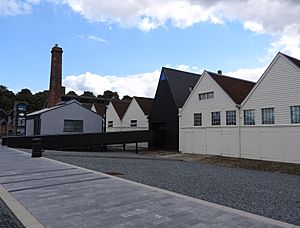 The entrance to 'Command of the Oceans', which was entered into the 2017 Stirling Prize

Workers at the dockyard performed eight years of restoration work on the MV Havengore, the ceremonial vessel that carried the body of Winston Churchill during his state funeral. In addition the dockyard is acting as custodian of artefacts, masts and rigging from the Cutty Sark and the Medway Queen, while their hulls are being restored elsewhere. 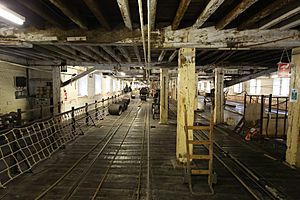 The interior of the ropery

The site is also home to a Dockyard Railway that has a diverse collection of locomotives and rolling stock, some of which can be seen in operation throughout the year.

Use in TV and other media

The Historic Dockyard Chatham spans 80 acres, has over 100 buildings and structures dating from the Georgian and Victorian periods to the present day, thus making it an attractive location for period filming over the years.

Some of the shows/films to have used the facilities and locations at Chatham Dockyard are:

In 2020, some scenes for Belgravia (TV series) were filmed at the dockyard.

All content from Kiddle encyclopedia articles (including the article images and facts) can be freely used under Attribution-ShareAlike license, unless stated otherwise. Cite this article:
Chatham Historic Dockyard Facts for Kids. Kiddle Encyclopedia.