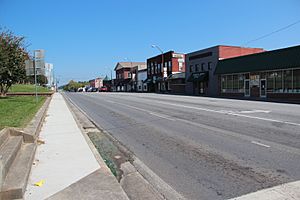 According to a popular legend, the town received its name after a road sign with the word "Chatsworth" fell off a passing freight train nearby. Someone put the sign on a post, and the name stuck.

Chatsworth was founded in 1905 as a depot on the Louisville and Nashville Railroad. It was incorporated as a town in 1906 and as a city in 1923. In 1915, the seat of Murray County was transferred to Chatsworth from Spring Place.

The Murray County School District holds preschool to grade twelve, and consists of six elementary schools, two middle schools, two high schools, and once had an academy school. The district has 451 full-time teachers and over 7,345 students.

All content from Kiddle encyclopedia articles (including the article images and facts) can be freely used under Attribution-ShareAlike license, unless stated otherwise. Cite this article:
Chatsworth, Georgia Facts for Kids. Kiddle Encyclopedia.