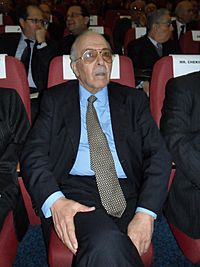 Chedly Ayari (Arabic: الشاذلي العياري‎code: ar is deprecated ) (21 August 1933 – 28 January 2021) was a Tunisian politician, economist, and diplomat. He was in many cabinet positions under the Habib Bourguiba goverment. He was President of the Central Bank of Tunisia from 24 July 2012 to 16 February 2018.

Ayari was Minister of Education from 1970 to 1971. He also was Minister of Finance from 1972 to 1974. He was a member of the Socialist Destourian Party. He was born in Tunis, Tunisia.

All content from Kiddle encyclopedia articles (including the article images and facts) can be freely used under Attribution-ShareAlike license, unless stated otherwise. Cite this article:
Chedly Ayari Facts for Kids. Kiddle Encyclopedia.