Cheese on toast facts for kids

Cheese on toast or in Scotland "Toasted cheese" or"Roasted Cheese" is a snack made by placing cheese on slices of bread and melting the cheese under a grill. It is a simple meal, popular in the United Kingdom. 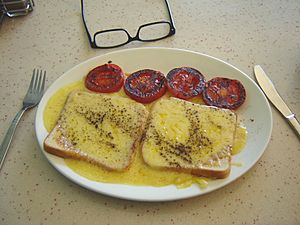 Cheese on toast consists of toast, either buttered or not, with cheese on one side. Further toppings are optional; the most basic being chopped onions (raw or grilled with the cheese), brown sauce or ketchup. Pickled cucumber, Branston pickle, fried tomatoes, fried eggs, Worcestershire sauce and baked beans are also common. Another common variation is to add something to the toast before applying the cheese, such as tomato, or a thin layer of spread Marmite, Vegemite (in Australia), cream spread, mustard or tomato ketchup.

Recipe books and internet articles tend to elaborate on the basics, adding ingredients and specifying accompaniments to make more interesting reading. Consequently, published recipes seldom deal with the most basic form of the dish and frequently refer to the similar dish of Welsh rarebit as "posh cheese on toast".

Cheddar cheese is most commonly used for cheese on toast, as this is a particularly good cheese for toasting. Lancashire dairies, in conjunction with a "National Cheese on Toast Day", have promoted Lancashire cheese as the best cheese to use. In Scotland similar dishes are often referred to as roasted cheese or 'melted cheese', where the bread need not be toasted before applying the cheese.

All content from Kiddle encyclopedia articles (including the article images and facts) can be freely used under Attribution-ShareAlike license, unless stated otherwise. Cite this article:
Cheese on toast Facts for Kids. Kiddle Encyclopedia.