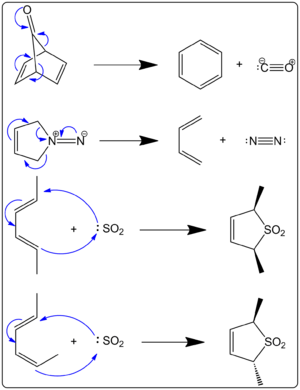 Cheletropic reactions are a subclass of cycloadditions. What sets cheletropic reactions apart is that on one of the reagents, both new bonds are being made to the same atom. A few examples are shown to the right in Figure 1. In the first case, the single atom is the carbon atom in the carbonyl group. That carbon atom ends up in carbon monoxide. The end result is making two new bonds to one atom. The first two examples are known as "cheletropic extrusions" because a small stable molecule is given off in the reaction. The driving force for these reactions is often the entropic benefit of releasing a gas (e.g. CO or N2).

One example of this is the cheletropic reactions of 1,3-dienes with sulfur dioxide. Chemists have carefully looked at the kinetics of this reaction. In 1976, Isaacs and Laila measured the kenetic factors for the addition of sulfur dioxide to butadiene derivatives. Rates of addition were monitored in benzene at 30 °C with an initial twentyfold excess of diene. They used a spectrophotometer to study light at 320 nm to measure the disappearance of SO2. The reaction showed "pseudo first-order kinetics". The chemists found that electron-withdrawing groups on the diene decreased the rate of reaction. Also, the reaction rate was affected considerably by steric effects of 2-substituents, with more bulky groups increasing the rate of reaction. (In other words, the larger the group of atoms hanging from the second carbon atom, the quicker the reaction ran.) The authors attribute this to the tendency of bulky groups to favor the cisoid conformation of the diene which is essential to the reaction (see table below). In addition, the rates at four temperatures were measured for seven of the dienes. From these measurements, chemists used the Arrhenius equation to calculate the enthalpy of activation (ΔH‡) and entropy of activation (ΔS‡) for each reaction. This was one of the first important efforts to study the kenetics of a cheletropic reaction.

Monnat, Vogel, and Sordo, in 2002, measured the kinetics of addition of sulfur dioxide to 1,2-dimethylidenecycloalkanes. They wrote that the reaction of 1,2-dimethylidenecyclohexane with sulfur dioxide can give two different products depending on reaction conditions. The reaction makes the corresponding sultine through a hetero-Diels-Alder reaction under kinetic control (≤ -60 °C), but, under thermodynamic control (≥ -40 °C), the reaction makes the corresponding sulfolene through a cheletropic reaction. The activation enthalpy for the hetero-Diels-Alder reaction is about 2 kcal/mol smaller than that for the corresponding cheletropic reaction. The sulfolene is about 10 kcal/mol more stable than the isometric sultine in CH2Cl2/SO2 solution. 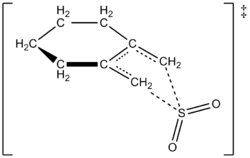 Proposed Transition State for Reaction of 1,2-Dimethylidenecyclohexane with SO2 to Give a Sulfolene Through a Cheletropic Reaction

The effect of the solvent of the cheletropic reaction of 3,4-dimethyl-2,5-dihydrothiophen-1,1-dioxide (shown at right) was kinetically investigated in 14 solvents. The reaction rate constants of the forward and reverse reaction in addition to the equilibrium constants were found to be linearly correlated with the ET(30) solvent polarity scale.

Reactions were done at 120 °C and were studied by 1H-NMR spectroscopy of the reaction mixture. The forward rate k1 was found to decrease by a factor of 4.5 going from cyclohexane to methanol. The reverse rate k-1 was found to increase by a factor of 53 going from cyclohexane to methanol, while the equilibrium constant Keq decreased by a factor of 140. It is suggested that there is a change of the polarity during the activation process as evidenced by relationships between the equilibrium and kinetic data. The authors say that the reaction appears to be influenced by the polarity of the solvent, and this can be shown by the change in the dipole moments when going from reactant to transition state to product. The authors also state that the cheletropic reaction doesn’t seem to be influenced by either solvent acidity or basicity.

The results of this study lead the authors to expect the following behaviors:

1. The change in the solvent polarity will influence the rate less than the equilibrium.

2. The rate constants will be characterized by opposite effect on the polarity: k1 will slightly decrease with the increase of ET(30), and k-1 will increase under the same conditions.

Addition of a Carbene to an Alkene to Form a Cyclopropane

One of the most synthetically important cheletropic reactions is the addition of a singlet carbene to an alkene to make a cyclopropane (see figure at left). A carbene is a neutral molecule containing a divalent carbon with six electrons in its valence shell. Because of this, carbenes are highly reactive electrophiles and generated as reaction intermediates. A singlet carbene contains an empty p orbital and a roughly sp2 hybrid orbital that has two electrons. Singlet carbenes add stereospecifically to alkenes, and alkene stereochemistry is retained in the cyclopropane product. The mechanism for addition of a carbene to an alkene is a concerted [2+1] cycloaddition (see figure). Carbenes derived from chloroform or bromoform can be used to add CX2 to an alkene to give a dihalocyclopropane, while the Simmons-Smith reagent adds CH2. 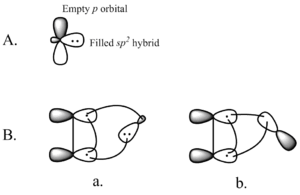 Figure 2. A) The Orbitals for Singlet Carbenes B) Non-linear Approach of a) Carbene sp2 Orbital and b) Carbene p Orbital

All content from Kiddle encyclopedia articles (including the article images and facts) can be freely used under Attribution-ShareAlike license, unless stated otherwise. Cite this article:
Cheletropic reaction Facts for Kids. Kiddle Encyclopedia.