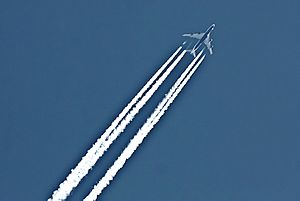 A Boeing 747 leaving a contrail. These contrails are often said to be chemtrails by conspiracy theorists.
Not to be confused with Contrail.

A chemtrail is a trail of chemicals left by an airplane at a high altitude. According to a conspiracy theory, the chemicals are said to be deliberately sprayed for reasons that are kept secret by the government. Most scientists and workers in the aviation industry say that the trails left by planes are just a form of condensation. These are called contrails (condensation trails).

People who believe the theory have speculated about what purpose chemtrails may serve. Some say it is to change the weather or stop global warming. Others say that it is to control the population by spreading chemicals that are harmful to the human reproductive system. Some more recent versions of the theory say that chemtrails are being spread by companies that make genetically-modified (GMO) crops. The chemtrails supposedly contain herbicides that will only kill normal (organic) crops and will not affect the genetically-modified crops.

Some claim that specially modified planes, supposedly owned and operated by the government, are necessary to create a chemtrail. The chemicals are said to either come from the engine or from special nozzles on the plane. In some versions of the theory, the chemical is said to be barium or a barium compound, but in other versions it is aluminum oxide, or a mixture of barium compounds and aluminum oxide.

Chemtrails are not to be confused with the spraying of chemicals over short distances at a low altitude, such as aerial firefighting or crop-dusting. 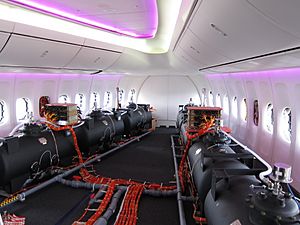 Several photographs on the Internet have been claimed to show the inside of planes that spread chemtrails. They show ballast barrels installed on the inside of the plane. In reality, these are photographs of test planes or firefighting planes. The real purpose of the barrels is to simulate the weight of passengers or cargo. The barrels are filled with water, and the water can be pumped from barrel to barrel to test different weight distributions while the aircraft is in flight.

All content from Kiddle encyclopedia articles (including the article images and facts) can be freely used under Attribution-ShareAlike license, unless stated otherwise. Cite this article:
Chemtrail conspiracy theory Facts for Kids. Kiddle Encyclopedia.