The Cherney Maribel Caves were formed primarily by solution prior to the last ice age. Glaciers wore down the surface of the land and exposed a layer of rock called Niagara Dolomite, exposing crevices and sinkholes, allowing water to easily enter the caves. As the glaciers melted, the rushing water enlarged the existing caves, and later partially filled them with silt and gravel as the flow of water receded. The rushing melt water also carved the river valley. Since then, frost action has loosened rock from the cliff face, partially closing the cave entrances.

About 1892, the first of the caves were discovered on the property of Henry A. Alrich, and was soon purchased by Charles Steinbrecher, who, in 1900, built the nearby Maribel Caves Hotel. Over the next several decades, tourists came to see the caves. In 1931, Adolph Cherney bought the property, including the nearby hotel. On November 5, 1963, Cherney sold the cave property to Manitowoc County for $16,200, leading to it becoming the first Manitowoc County park.

Coopers Cave is located about midway along the park bluff. The cave has a large rectangular entrance and also has a small crevice entrance. It is a square tube solutional cave that is quiet and dry. About nine feet below the entrance is a natural spring that flows year round into the West Twin River.

Pancake Cave is difficult to reach because no trails lead to it. The cave is about eight feet deep and is shaped like a pancake. 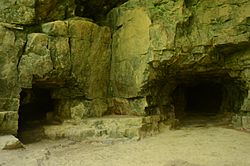 Tunnel Passage, discovered in 2005, is about 20 feet long and approximately three feet in height.

Spring Cave is a small inaccessible cave located on adjacent private property. A natural spring that flows from the cave was previously used by the nearby Maribel Caves Hotel.

Maribel New Hope Cave is the largest cave in Manitowoc County. It was discovered on Sunday, February 5, 1984. It is noted for its walking passageways, and is lighted by electric floodlights. It contains examples of stalactites, stalagmites, helictites, and cave bacon. The cave is a public show cave. It is open the 3rd Sunday of every month from May through October from 10 am to 3 pm. The cave is still being excavated and explored further by members of the Wisconsin Speleological Society. College instructors use this cave as a living laboratory.

This is a cave that is located to the south just beyond the Tartarus Cave System in the same bluff. It is the most recently discovered cave by the Wisconsin Speleological Society. It consists of a three to four foot high horizontal entrance, that leads to over 70 feet of hands and knees crawlway passages. It is believed that further excavation, or digging, will open up passageway continuations so it will eventually connect it up to the Tartarus Cave System just to the north.

The park offers a playground, a picnic area, and hiking and biking trails. A picnic shelter with bathrooms is located in the picnic area. Along the cliff line are several varieties of rare ferns, along with creeping plants and wild flowers. The beauty of the area made it a popular tourist destination even before Manitowoc County acquired the property in 1963.

In August 2013, a tornado ripped through Cherney Maribel Cave County Park. It destroyed more than 75 percent of the trees, the picnic shelter, and the restrooms.

All content from Kiddle encyclopedia articles (including the article images and facts) can be freely used under Attribution-ShareAlike license, unless stated otherwise. Cite this article:
Cherney Maribel Caves County Park Facts for Kids. Kiddle Encyclopedia.