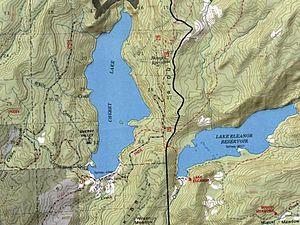 Cherry Lake (also known as Lake Lloyd) is an artificial lake in the Stanislaus National Forest of Tuolumne County, California, U.S.A., about 25 miles (40 km) east of the city of Sonora. It is at an elevation of 4,700 feet (1,433 m) on the western side of the Sierra Nevada, and lies just outside the western boundary of Yosemite National Park. The lake has a capacity of 273,500 acre⋅ft (337,400,000 m3) and is formed by Cherry Valley Dam on Cherry Creek.

This campground offers sites on a first come, first served basis. They have picnic tables and fire rings, many with grates for cooking. Some sites offer beautiful lake vistas. The roads through the campground are paved. There are bathroom facilities but no showers. Running water is located every few campsites.

The dam is composed of earth and rock-fill and has a height of 315 ft (96 m) above the original streambed. It was built by San Francisco City and County and the Modesto Irrigation District and Turlock Irrigation District. It was completed in 1956. The lake stores water for the Hetch Hetchy Project, which supplies drinking water to the San Francisco Bay Area, Modesto and Turlock districts. Recreation available at the lake includes, boating, skiing, swimming and fishing. Human contact with the water is allowed because the water has to be filtered anyway. Water from the lake powers the Dion R. Holm Power Plant, a 165 MW hydroelectric facility.

All content from Kiddle encyclopedia articles (including the article images and facts) can be freely used under Attribution-ShareAlike license, unless stated otherwise. Cite this article:
Cherry Lake Facts for Kids. Kiddle Encyclopedia.