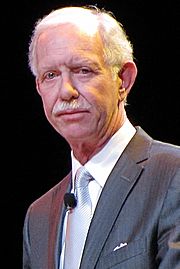 Chesley Burnett "Sully" Sullenberger III is an American retired airline captain celebrated for the January 15, 2009 water landing of US Airways Flight 1549 in the Hudson River off Manhattan after the plane was disabled by striking a flock of Canada geese immediately after takeoff; all 155 people aboard survived.

He is the co-author, with Jeffrey Zaslow, of the New York Times bestseller Highest Duty: My Search for What Really Matters, a memoir of his life and of the events surrounding Flight 1549, published in 2009 by HarperCollins. His second book, Making a Difference: Stories of Vision and Courage from America's Leaders, was published in May 2012. He was ranked second in Time's "Top 100 Most Influential Heroes and Icons of 2009", after Michelle Obama.

At the age of 12, his IQ was deemed high enough to join Mensa International. In high school, he was the president of the Latin club, a first chair flutist, and an honor student. His high school friends have said that Sullenberger developed a passion for flying from watching jets based out of Perrin Air Force Base. He was an active member of the Waples Memorial United Methodist Church in Denison, and graduated from Denison High School in 1969, near the top of his class of about 350. At 16, Sullenberger learned to fly in an Aeronca 7DC from a private airstrip near his home. He said the training he received from a local flight instructor influenced his aviation career for the rest of his life. 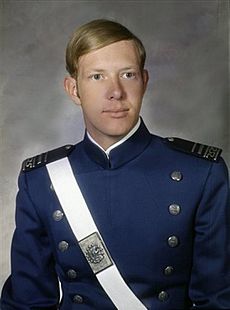 Sullenberger was appointed to the United States Air Force Academy, entering with the Class of 1973 in June 1969. He was selected along with around a dozen other freshmen for a cadet glider program, and by the end of that year, he was an instructor pilot. In the year of his graduation, 1973, he received the Outstanding Cadet in Airmanship award, as the class "top flyer". Following graduation with a Bachelor of Science and his commissioning as an officer, the Air Force immediately sent Sullenberger to Purdue University to pursue a master's degree prior to entering Undergraduate Pilot Training (UPT).

Sullenberger was employed by US Airways and its predecessor airlines from 1980 until 2010. (Pacific Southwest Airlines was acquired by US Air, later US Airways, in 1988.) He holds an Airline Transport Pilot Certificate for single and multi-engine airplanes, and a Commercial Pilot Certificate rating in gliders, as well as a flight instructor certificate for airplanes (single, multi-engine, and instrument), and gliders. In total, he has more than 40 years and 20,000 hours of flying experience. In 2007 he became the founder and CEO of Safety Reliability Methods, Inc. (SRM), a firm providing strategic and tactical guidance to enhance organizational safety, performance, and reliability. 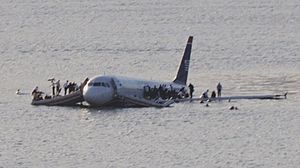 US Airways Flight 1549 afloat in the Hudson River

On January 15, 2009, Sullenberger was pilot in command of a US Airways Flight 1549, an Airbus A320 taking off from LaGuardia Airport. Shortly after takeoff, the plane struck a large flock of birds (Canada geese) and lost power in both engines. Quickly determining he would be unable to reach any airport Sullenberger piloted the plane to a water landing on the Hudson River. All aboard were rescued by nearby boats.

Sullenberger said later: "It was very quiet as we worked, my copilot [Jeff Skiles] and I. We were a team. But to have zero thrust coming out of those engines was shocking—the silence." Sullenberger was the last to leave the aircraft, after making sure all passengers and crew had evacuated.

Sullenberger, described by friends as "shy and reticent," was noted for his poise and calm during the crisis; New York City Mayor Michael Bloomberg dubbed him "Captain Cool." Nonetheless, Sullenberger suffered symptoms of post-traumatic stress disorder in subsequent weeks, including sleeplessness and flashbacks. He said that the moments before the ditching were "the worst sickening, pit-of-your-stomach, falling-through-the-floor feeling" that he had ever experienced. He also said: "One way of looking at this might be that for 42 years, I've been making small, regular deposits in this bank of experience, education and training. And on January 15, the balance was sufficient so that I could make a very large withdrawal."

The National Transportation Safety Board ruled that Sullenberger made the correct decision in landing on the river instead of attempting return to LaGuardia because the normal procedures for engine loss are designed for cruising altitudes, not immediately after takeoff. Simulations showed that Flight 1549 could have barely made it back to LaGuardia had that maneuver begun immediately after the bird strike, but this scenario completely neglects the time needed to understand what had happened and assess the situation.

U.S. President George W. Bush called Sullenberger to thank him for saving the lives of the passengers, as did President-elect Barack Obama, who also invited him and the crew to join the presidential inauguration ceremony. On January 16, 2009, the United States Senate passed a resolution recognizing and honoring Sullenberger, Skiles, the cabin crew, the passengers, and the first responders involved in Flight 1549's emergency landing. The United States House of Representatives passed a similar resolution on January 26, 2009.

Sullenberger attended the presidential inauguration on January 20, 2009, where he and his wife met President Obama. On January 22, 2009, he and the rest of the crew of Flight 1549 were awarded a Masters Medal by the Guild of Air Pilots and Air Navigators. A ceremony for Sullenberger was held on January 24, 2009 in Sullenberger's hometown of Danville, California, where he was presented with awards including Danville's "Key to the Town", and was named an honorary Danville police officer. 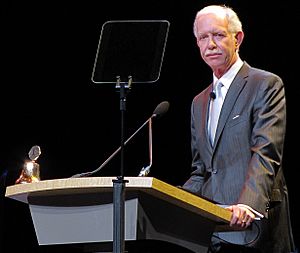 Sullenberger at the LIONS World Convention 2010 in Sydney

Sullenberger is married to fitness instructor Lorraine "Lorrie" Sullenberger, with whom he has two daughters, Kate and Kelly. The Sullenbergers reside in the San Francisco Bay Area.

The 2010 song "A Real Hero", by French electronica artist College and the band Electric Youth, is about Captain Sullenberger and the Flight 1549 water landing.

"Hudson River Runway", the March 14, 2011 episode of the TV series Mayday, documents the events around Flight 1549's emergency landing, and contains interviews with several of its real-life participants. Captain Sullenberger is not interviewed in the show, but is portrayed in reenactments by actor Christopher Britton.

Flight 1549 is referred to in episodes of the TV series Law and Order: SVU and House, MD.

Matt Damon portrays an airline pilot in the February 10, 2011 episode of the NBC TV comedy 30 Rock, in which he brags that a great pilot like himself does not land on the Hudson River but avoids hitting birds altogether.

A Z Nation episode has a character flying a small airplane that needs to land near a city with no nearby airport, and so declares, "I'm gonna set her down on the river, Sully Sullenberger Style".

The 2016 dramatic feature film Sully was adapted from Sullenberger's memoir Highest Duty: My Search for What Really Matters. Directed by Clint Eastwood and starring Tom Hanks as Chesley Sullenberger, it recreates the events around the Hudson River landing.

The Airbus A320 is occasionally and casually referred to as "Sully's Ark" by aviators, out of respect for Flight 1549's long water float-time and the zero fatalities in the incident.

All content from Kiddle encyclopedia articles (including the article images and facts) can be freely used under Attribution-ShareAlike license, unless stated otherwise. Cite this article:
Chesley Sullenberger Facts for Kids. Kiddle Encyclopedia.