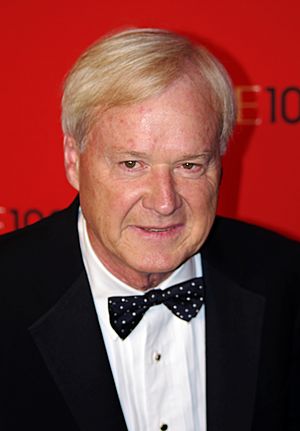 Chris Matthews (born December 17, 1945 near Philadelphia) is an American news anchor and political commentator. He is known for his talk show Hardball on MSNBC. On weekends he hosted the syndicated NBC News program The Chris Matthews Show.

Matthews went to La Salle College High School. Matthews served in the United States Peace Corps in Swaziland from 1968 to 1970 as a trade development adviser.

Matthews worked with Tip O'Neill, the Speaker of the House. O'Neill, a Democrat, was a political rival of Republican president Ronald Reagan, but the two remained friends, saying that after 6:00 the two could go out for a drink together. Matthews wrote a book about their relationship. The last episode of The Chris Matthews Show was shown on July 21 2013. After he wrote a best selling book about politics called Hardball, Matthews joined MSNBC and hosted a show of the same name. Matthews is a moderate Democrat who has supported Republicans beofre and said that he is "more conservative than people think I am." However, Matthews has been a long time supporter of Barack Obama, who is part of the Democratic Party's left wing. In 2004, following a speech by Obama, Matthews said he had "seen the first black president," a prediction which came true four years later. Matthews once stated that Obama gave him a "thrill up his leg." This quote was widely mocked by many people. He has also been critical of Hillary Clinton, and has said that she got her office by her husband's fame and not on her own ability. As of 2015, Matthews hosts Hardball with Chris Matthews on the MSNBC cable channel at 5:00PM on weekdays. He is also a political commentator that appears on other shows. Matthews is married to his wife of thirty five years, Kathleen, a businesswoman who is an executive at Marriott. He is a Roman Catholic.

All content from Kiddle encyclopedia articles (including the article images and facts) can be freely used under Attribution-ShareAlike license, unless stated otherwise. Cite this article:
Chris Matthews Facts for Kids. Kiddle Encyclopedia.