The Chikaskia River begins as an intermittent stream in southwestern Pratt County, Kansas and initially flows eastwardly into Kingman County, where it turns southeastward for the remainder of its course through Harper and Sumner counties in Kansas and Grant and Kay counties in Oklahoma. In Kay County the river flows past the town of Blackwell and flows into the Salt Fork 5 miles (8 km) southeast of Tonkawa.

The United States Board on Geographic Names settled on "Chikaskia River" as the river's official name and spelling in 1897. According to the Geographic Names Information System, the river has also been known as "Chicaskia River", "Sha wa cas kah River", and "Sha-wa-cas-kah River." 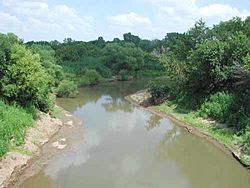 The Chikaskia River at Blackwell, Oklahoma

The Chikaskia River and the Salt Fork are known for their large catfish.

All content from Kiddle encyclopedia articles (including the article images and facts) can be freely used under Attribution-ShareAlike license, unless stated otherwise. Cite this article:
Chikaskia River Facts for Kids. Kiddle Encyclopedia.