Blackwell is a city in Kay County, Oklahoma, United States, located at the intersection of U.S. Highway 177 and State Highway 11 along Interstate 35. The population was 7,092 at the 2010 census and 6,085 in the 2020 Census. Blackwell was established following the September 16, 1893 Cherokee Outlet land run by A. J. Blackwell. Blackwell has an agricultural and fossil fuel based economy. 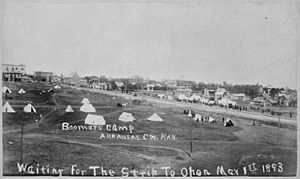 Blackwell came into existence during the Cherokee Outlet Opening on September 16, 1893 in the run known as the Cherokee Strip Land Run. The town is named for A. J. Blackwell, who was the dominant force in its founding. A post office was established on December 1, 1893. Due to a struggle for regional prominence between Blackwell and nearby Parker, the post office was named Parker from April 2, 1894, to February 4, 1895. After the latter date, the name reverted to Blackwell.

Andrew Blackwell had settled in the area in 1882, having married the former Rosa Vaught who was of Cherokee descent, he was eligible to found the city. Blackwell served as Justice of the Peace and Mayor of Blackwell.

Blackwell's first school opened in September 1893 in a small, frame building with fifty-two students in attendance. A gradual enrollment increase created a need for ten teachers by 1899.

Blackwell has a reputation as a sundown town, having kept out African Americans through violent expulsion and the display of a sign warning them to leave town by sunset. Blackwell's expulsion of its African-American residents around 1893 is described in the 1967 book From Slavery to Freedom by John Hope Franklin. 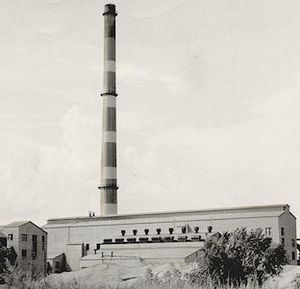 Blackwell Zinc Smelter (Photograph used for a story in the Daily Oklahoman newspaper, September 23, 1958. Caption: 'The Blackwell Zinc Co. smelter employs upward of 1,000 persons in Blackwell and contributes an annual industrial payroll to the city estimated at $4 millions.')

The Blackwell Zinc Company smelter first began operations in 1917. In 1974, the 80-acre Blackwell Zinc Smelter facility ceased operations. At the time, it was the city's largest employer, employing 800 people in 1972, and over 1,000 at its peak. It also was one of the largest zinc smelter facilities in the United States. After its closure the land and was donated to the Blackwell Industrial Authority (BIA). Soil from the land was repurposed throughout the city, leading to widespread contamination of air and water, including the Chikaskia River.

Additionally, one of the plant's two Corliss stationary steam engines was moved to Pawnee Oklahoma and preserved. This engine is run for viewing by the public on the first weekend of May.

The Oklahoma Department of Environmental Quality has been overseeing remediation of contamination at the industrial park, groundwater, and soil throughout parts of the city since 1992. Phelps Dodge Corporation, a subsidiary of Freeport-McMoRan Copper & Gold Inc, has owned the site since 1999. On October 15, 2009 the City of Blackwell filed suit against Freeport-McMoRan calling the contamination a nuisance, and alleging that 58 million pounds of toxic waste remained in the city, causing illness within its 7,200 residents. Following several changes of venue between Federal court and Kay County courts, the City of Blackwell and Freeport settled for 54-million dollars on February 4, 2010.

Blackwell was a victim of the 1955 Great Plains tornado outbreak, a deadly tornado outbreak that struck the southern and central U.S Great Plains States on May 25–26, 1955. It produced at least 46 tornadoes across seven states including two F5 tornadoes in Blackwell, Oklahoma, and Udall, Kansas. The outbreak killed 102 from three tornadoes while injuring hundreds more. Unusual electromagnetic activity was observed, including St. Elmo's fire.

The Blackwell tornado formed in Noble County at around 9:00 PM CDT before crossing through the eastern portions of the Kay County town of Blackwell as an F5 wedge tornado. Then about 400 yd (0.23 mi) wide (Grazulis 1991), It claimed the lives of 20 people in Blackwell and injured over 200 before crossing into and dissipating over Cowley County, Kansas. Along with destroying nearly 200 homes, the tornado demolished two of the town's main employers, the Acme Foundry and the Hazel Atlas Glass plant. 400 homes were destroyed or swept away, and 500 other homes were damaged. 60 businesses were also destroyed and the local hospital sustained major damage. Most of the western half of the town was spared the worst of the damage.

In May 1906, an L5 meteorite fell, landing in Blackwell, Oklahoma. On May 25, 1955, a deadly F5 tornado, part of the 1955 Great Plains tornado outbreak, struck Blackwell at approximately 9:30 pm and cut a swath of destruction through the northeastern portion of the city, roughly centered in the neighborhoods surrounding Riverside Park. 20 residents died and 250 were injured. The tornado outbreak included another F5 tornado that struck Udall, Kansas killing 82 people and injuring 270. The outbreak spawned 19 tornadoes across Oklahoma, Texas and Kansas alone. 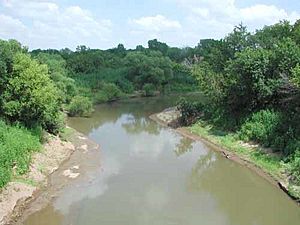 The Chikaskia River at Blackwell. 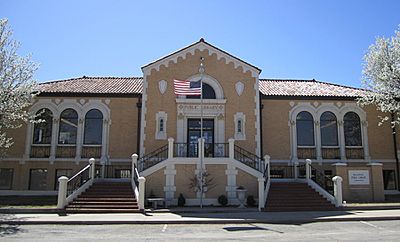 The Blackwell Public Library was constructed in 1921.

The Top of Oklahoma Historical Society Museum is located in the Electric Park Pavilion and displays artifacts from the land run, antiques, and local history. Blackwell hosts the Kay County Free Fair in September. Blackwell is served by 5 major parks including Riverside, Bagby, Rogers, Memorial, and Legion parks. Blackwell has 1 major and 2 minor public pools. Blackwell is also home to a brick WPA armory which is listed on the National Register of Historic Places.

The Blackwell School District consists of Blackwell Elementary, Blackwell Middle School, and Blackwell High School. As recently as 2017 Huston, Northside, Parkside, and Washington Elementary Schools were used for Pre-K through 5th grade classes. The former school sites are all listed on the National Register of Historic Places. Blackwell's school mascot is the Maroon Spirit, which was memorialized in the Maroon Park on Main Street with a mural painted by the Blackwell High School art class depicting the Maroon Spirit with the names of the seniors given the title of "Maroon Spirit" and "Miss BHS" dating back to the early 1900s. Historically, Oklahoma Baptist College served the city's higher education needs between 1901 and 1913.

Blackwell has a full-service city government, that includes, electricity, water, sewage, recreation, police and fire services. The police department has 17 full-time officers, a jail and operates 24 hours per day. The Blackwell Fire Department is a full-time fire department, staffed with 20 paid firefighters/EMT/Paramedics and also provides ambulance service to Blackwell and the surrounding communities.

Blackwell and the surrounding communities are served by Stillwater Medical Center's Blackwell branch, a 53-bed facility with 24-hour emergency services and Heli-Pad.

All content from Kiddle encyclopedia articles (including the article images and facts) can be freely used under Attribution-ShareAlike license, unless stated otherwise. Cite this article:
Blackwell, Oklahoma Facts for Kids. Kiddle Encyclopedia.