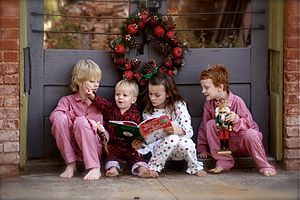 Introducing poetry to children helps develop their literacy skills by developing vocabulary through rhythmic structure of the stanzas which give context to new and unknown words; phonemic awareness through pitch, voice inflection, and volume; memorization through patterns and sequences; self-expression through the creativity and emotion of the words; physical awareness of breath, movements of the mouth and other gestures as they align to the rhythm of the poetry. Scholars also see that poetry and nursery rhymes are universal throughout cultures as an oral tradition.

All content from Kiddle encyclopedia articles (including the article images and facts) can be freely used under Attribution-ShareAlike license, unless stated otherwise. Cite this article:
Children's poetry Facts for Kids. Kiddle Encyclopedia.