Chimney Tops is one of the few instances of a bare rock summit in the Smokies. The bedrock atop the mountain has been exposed to natural weathering of the upper layers of soil strata. The bedrock is mostly Anakeesta Formation metamorphic rock, especially slate, phyllite, and metasiltsone. It was formed 200 million years ago when the North American and African plates collided during the Appalachian orogeny. 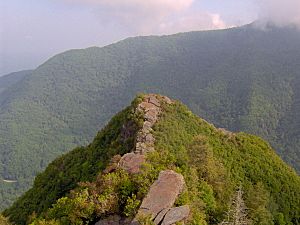 The lower capstone of Chimney Tops, looking north from the higher capstone.

The Cherokee name for Chimney Tops is Duniskwalgunyi, or "forked antler", referring to its resemblance to the deer antlers. In the Cherokee legend "Aganunitsi and the Uktena", the captured medicine man, Aganunitsi, to free himself, searches remote parts of the Smokies to find the giant reptile, the Uktena, and seize an amulet from its forehead. In his quest, Aganunitsi searches distant gaps and peaks in the Smokies before going to Duniskwalgunyi, the Gap of the Forked Antler, and to the lake of Atagahi, and at each found monstrous reptiles." 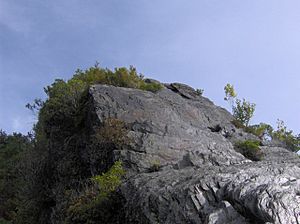 The Road Prong Trail, which follows the stream of the same name at the base of Chimney Tops, is one of the oldest trails in the Smokies. In the 18th and 19th centuries, this ancient path was known commonly as the Indian Gap Trail. In 1832, the Oconaluftee Turnpike was constructed between Indian Gap and Smokemont. This road was expanded during the Civil War by Cherokee leader Col. Will Thomas, running parallel to the modern trail.

The mountain's current name was probably given to it by residents of the Sugarlands, a valley to the north of the mountain that was home to a small Appalachian community before the national park was formed. Before the Sugarlands was reforested, Chimney Tops was clearly visible from most of the valley. Local legend even suggested that the top of the mountain was covered in soot. 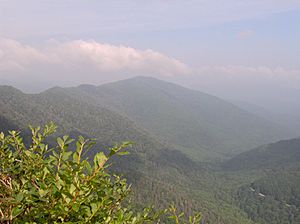 Sugarland Mountain, looking northwest from the summit of Chimney Tops.

A common route to closely see the peaks is the Chimney Tops Trail, which can be accessed about 6.9 miles south/east of the Sugarlands Visitor Center on Newfound Gap Road. Before the summit part of the trail was closed, the trail ended at the foot of the south capstone (the higher of the two), but various unmaintained spurs crossed over to the lower summit.

While no technical gear was needed, a climb was necessary to reach the capstones. From the summit, Mount Le Conte and Mount Kephart can be seen in the east, the Sugarland Mountain in the west and the Sugarlands valley in the north.

A severe fire in late 2016 led to closure of many trails in the Great Smoky Mountains, including in the Chimney Tops area. The trail reopened in October 2017, with a new observation area that offers a place to view both of the bare rock points of the summit. However, due to the extreme heat of the fires, access to the summit is no longer permitted.

Contains an excellent section on the geology of Chimney Tops.

All content from Kiddle encyclopedia articles (including the article images and facts) can be freely used under Attribution-ShareAlike license, unless stated otherwise. Cite this article:
Chimney Tops Facts for Kids. Kiddle Encyclopedia.