There is considerable controversy over just which member of the Le Conte family the mountain was named for. The United States Geological Survey lists Joseph Le Conte, famous geologist, eugenicist, and advocate for racial segregation, as the man for whom the mountain was named, supposedly by Swiss explorer Arnold Guyot. However, in recent years this claim has been challenged by local authorities (including the authors of A Natural History of Mount Le Conte), who in turn believe that the mountain derives its name from Joseph's older — and less famous — brother John Le Conte, a physicist at South Carolina College. Their story alleges that the mountain was named by Samuel Buckley in respect to John's help in moving his barometer to Waynesville, North Carolina, at Buckley's request.

Although the mountain was measured in the 1850s, very little activity took place on the mountain until the 1920s, when Paul Adams moved to Knoxville, Tennessee. An enthusiastic hiker and explorer, Adams spent much of his free time creating adventures in the mountains. In 1924 he joined the Great Smoky Mountain Conservation Association, a group dedicated to making the region into a national park. As part of this push, later that year he led an expedition up the mountain with dignitaries from Washington, in order to show the group what rugged beauty those mountains held. The group spent the night in a large tent which would later become a cabin, and eventually the LeConte Lodge, a popular resort near the top of the peak. The trip was a great success and about a decade later Mount Le Conte, and the surrounding region, was protected as part of the Great Smoky Mountains National Park.

Mount Le Conte lies in the Appalachian Blue Ridge geologic and physiographic province. It is made up of Late Proterozoic rocks; mostly metamorphosed sandstone, siltstone, shale, and conglomerate formed over 800–450 million years ago. Millions of years of weathering has caused significant erosion, giving the mountains in the region, including Le Conte, a distinctive, gentle sloping feature. A dense stand of Southern Appalachian spruce-fir forest, a remnant of the last Ice Age, coats the mountain's peaks and upper slopes.

Mount Le Conte has a humid continental climate (Dfb) bordering on a subalpine climate (Dfc) due to its elevation, giving it cool summers, and cold winters. Annual snowfall averages 40 inches near the base to 80 inches on the highest peak. The climate is much cooler and somewhat wetter than the lower elevations. The lowest temperature ever recorded was -32 °F, on January 13, 1986. The highest temperature ever recorded was 82 °F on July 1, 2012. 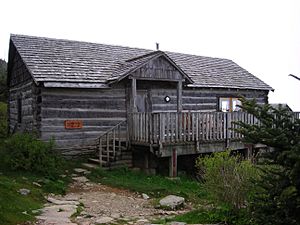 The office of the LeConte Lodge

Mount Le Conte is notable for having the highest inn providing lodging for visitors in the Eastern United States. The LeConte Lodge is a small resort, established in 1925, located on the top of the mountain. First, it was a tent, then a single cabin, and now it is a series of small personal log cabins and a central lodge/dining hall situated along the top of a mountain. It can accommodate about 50 guests a night, and is generally open from March–November. There is no transportation to the lodge and all guests must hike in on one of the five trails that access the mountain. Due to this lack of access, supplies must be brought in via helicopter and llama pack trains. The climate at the lodge is similar to that found in southern Canada, with cool summers and cold, snowy winters. Currently, the lodge is maintained under a lease with the National Park Service. 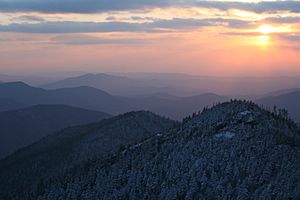 Le Conte's location in the Great Smoky Mountains National Park has spurred the creation of five trails that lead to the LeConte Lodge, with spur trails to each of the individual peaks. In addition to the scenic overlooks and peaceful woodlands endemic to each path, every trail offers its own unique attractions along the way to the summit. They are listed with their distances one-way as follows

The combined traffic of these five trails makes Mount Le Conte one of the most heavily traversed mountains in the park. The Alum Cave and Rainbow Falls trails in particular tend to become overcrowded with visitors seeking rewarding payoffs just a few miles into the trails. Hikers can stay in an Appalachian Trail style shelter overnight for $4, limited to 12 spots, with a backcountry permit and reservations from the National Park Service.

The area was affected by the 2016 Southeastern United States wildfires. The park, including the area around Mt. Le Conte, was evacuated during the disaster.

All content from Kiddle encyclopedia articles (including the article images and facts) can be freely used under Attribution-ShareAlike license, unless stated otherwise. Cite this article:
Mount Le Conte (Tennessee) Facts for Kids. Kiddle Encyclopedia.