Standing 21 to 27 inches (53 to 69 cm) in height at the withers and weighing 55 to 90 pounds (25 to 41 kg), the Chinook is balanced and muscular. The United Kennel Club (UKC) breed standard states, "The ideal coloration runs from light honey color to reddish-gold. Black markings on the inside corners of the eyes are preferred. Dark tawny to black markings on the ears and muzzle are preferred. Guard hairs on the tail may be black. No white markings are allowed. Buff markings on the cheeks, muzzle, throat, chest, breeches, toes and underside are acceptable." The UKC standard faults any color other than tawny and disqualifies albinism. Other proposed standards state that the medium-length double coat is "tawny" in color, with darker shadings on muzzle and ears; white dogs are not allowed, nor are other colors. Eyes are brown to amber in color. Ear carriage is variable, but dropped is preferred and the head more strongly rectangular than other sleddog breeds. The tail is a well-furred saber and not the usual brush or plume of Arctic breeds. Overall, the Chinook seems to owe more to molosser than to spitz ancestry.

The Chinook is an affectionate and playful family companion with a special devotion toward children. It is a willing worker who is eager to please and enthusiastic to learn. The Chinook is highly trainable, adaptable, and versatile in his abilities. Gregarious with other dogs, the Chinook works well in teams and within family packs. The Chinook is a dignified dog; some may be reserved with strangers but should never appear shy or aggressive. 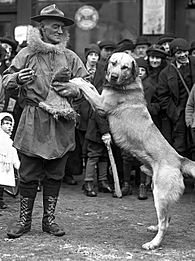 The Chinook owes its existence to one man: Arthur Treadwell Walden of Wonalancet, New Hampshire. The breed derives principally from one male ancestor born in 1917, named "Chinook", who was Walden's lead dog and stud. "Chinook" derived from a crossbreeding of a female Greenland Dog from the Peary North Pole expedition with a large, tawny male Mastiff/St. Bernard mix. Photos of "Chinook" show a drop-eared dog with a broad Mastiff head and muzzle. Walden's leader was bred to Belgian Sheepdogs, German Shepherd Dogs, Canadian Eskimo Dogs and perhaps other breeds; the progeny were bred back to him to set the desired type and was apparently a strong reproducer of his own traits. Arthur Walden was an experienced dog driver with years of experience in the Yukon; he was the lead driver and trainer on Byrd's 1929 Antarctic expedition. He is credited with bringing sled dog sports to New England and with founding the New England Sled Dog Club in 1924. The 12-year-old "Chinook" was lost on the Byrd expedition.

Control of the core breeding stock passed from Walden to Julia Lombard and from her to Perry Greene in the late 1940s. Greene, a noted outdoorsman, bred Chinooks in Waldoboro, Maine, for many years until his death in 1963. Rare and closely held by Greene, who was for many years the only breeder of Chinooks, the population dwindled rapidly after his death. By 1981 only eleven breedable Chinooks survived. Breeders in Maine, Ohio and California divided the remaining stock and managed to save the type from extinction.

The Chinook obtained registered status with the UKC in 1991; current numbers of registered animals are around 800. Only about 100 puppies are born annually worldwide. The registry has a cross-breeding program under which Chinooks are bred to individuals of other breeds thought to have contributed to Chinook development; fourth-generation backcross descendants of such crosses may be accepted as UKC purebred Chinooks if they meet the Chinook Owner Association's Cross Breeding Program requirements.

Chinooks joined the American Kennel Club (AKC) Foundation Stock Service in 2001 and were later added to the AKC's Miscellaneous Class in 2010. Finally, in January 2013 the Chinook became the AKC's 176th breed and joined the working group. Chinooks are still working for recognition from other major kennel clubs.

Although still used for recreational dog sledding by some owners, Chinooks today appear to be used largely as family pets. Individuals are also used for dog-packing, search and rescue, skijoring, and obedience and dog agility trials.

All content from Kiddle encyclopedia articles (including the article images and facts) can be freely used under Attribution-ShareAlike license, unless stated otherwise. Cite this article:
Chinook (dog) Facts for Kids. Kiddle Encyclopedia.