Waldoboro is a town in Lincoln County, Maine, in the United States. The population was 5,075 at the 2010 census. Waldoboro is a fishing town. 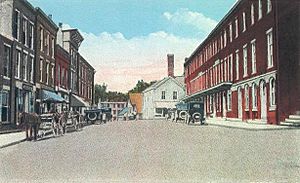 In 1629 the area that would become Waldoboro was granted to John Beauchamp of London and Thomas Leverett of Boston, England and was known as the Muscongus Patent. The patent lay dormant until 1719 when Leverett’s great-grandson, John Leverett, President of Harvard College, revived the ancient claim and formed the Lincolnshire Proprietors, also known as the Ten Proprietors, so named for the ten shares distributed, one to each member. General Samuel Waldo of Boston acquired a controlling interest in the patent in 1729 and it henceforward become known as the Waldo Patent.

First called Broad Bay, the village was settled between 1733 and 1740, but suffered a devastating attack as part of the Northeast Coast Campaign (1746) by Native Americans allied with New France during King George's War. Houses were burned and inhabitants killed or carried away as captives. Survivors fled to the nearby settlements of St. George or Pemaquid. Peace returned with the 1748 Treaty of Aix-la-Chapelle.

In 1752–1753, Samuel Waldo, son of the general Jonathan Waldo, visited Germany and recruited about 1,500 immigrants to Waldoboro on the ship Lydia. Some were followers of Martin Luther and Huldrych Zwingli but they did not immigrate for religious reasons like the Pilgrims but for "...increasing their worldly goods.", most from the Rhineland. Waldo hired Sebastian Zouberbuhler as an agent. Many settled on the western side of Broad Bay, although in 1763–1764 the land was claimed under the Pemaquid Patent. About 300 residents moved to the Moravian settlements in what is now Forsyth County, North Carolina, but the remainder bought their properties. On June 29, 1773, the township was incorporated as Waldoborough, named for the original proprietor.

Waldoboro became county seat of Lincoln County in 1786, but the designation would shift to Wiscasset in 1880. Farms produced hay and potatoes. The Knox and Lincoln Railroad arrived and spurred the town's development. Industries would include an iron foundry, an oakum mill, a carding and cloth-dressing mill, a grain mill, sawmills and planing mills, furniture and molding mills, a door, sash and blind factory, and a carriage factory. There were also marble and granite yards and a pottery. But ship building was the principal business, with eight large vessels built in 1880. During the 19th century Maine became famous for its great shipbuilding center. Waldoboro was the launching port for the Governor Ames in 1888, the first five masted schooner. The Governor Ames was built in Waldoboro's Leavitt Storer Shipyard. A port of entry, the town features an 1857 custom house designed by Ammi B. Young.

Places listed on the National Register of Historic Places 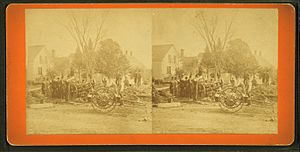 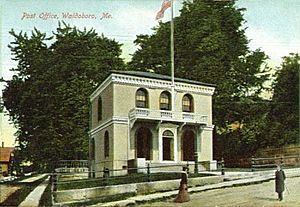 There were 2,171 households of which 28.5% had children under the age of 18 living with them, 46.9% were married couples living together, 11.6% had a female householder with no husband present, 4.3% had a male householder with no wife present, and 37.2% were non-families. 29.7% of all households were made up of individuals and 12.9% had someone living alone who was 65 years of age or older. The average household size was 2.34 and the average family size was 2.85.

There were 1,983 households out of which 31.2% had children under the age of 18 living with them, 54.5% were married couples living together, 9.6% had a female householder with no husband present, and 32.0% were non-families. 25.7% of all households were made up of individuals and 11.4% had someone living alone who was 65 years of age or older. The average household size was 2.45 and the average family size was 2.91. 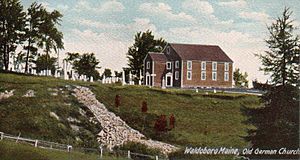 All content from Kiddle encyclopedia articles (including the article images and facts) can be freely used under Attribution-ShareAlike license, unless stated otherwise. Cite this article:
Waldoboro, Maine Facts for Kids. Kiddle Encyclopedia.