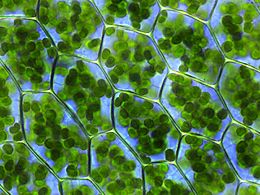 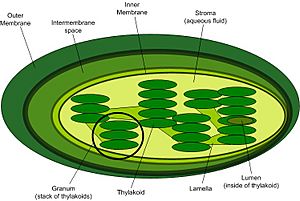 Each chloroplast is surrounded by a double walled membrane. In the layered stacks are flat disk-shaped thylakoids. They contain light-absorbing pigments, including chlorophyll and carotenoids, as well as proteins which bind the pigments. Like mitochondria, chloroplasts also contain their own DNA and ribosomes.

Mitochondria also had a similar origin, but chloroplasts are found only in plants and protista. In green plants, chloroplasts are surrounded by two lipid-bilayer membranes. They are thought to correspond to the outer and inner membranes of the ancestral cyanobacterium. Chloroplasts have their own genome, which is much smaller than that of free-living cyanobacteria. The DNA which remains shows clear similarities with the cyanobacterial genome. Plastids may contain 60–100 genes whereas cyanobacteria often contain more than 1500 genes. Many of the missing genes are encoded in the nuclear genome of the host.

In some groups of mixotrophic protists such as the dinoflagellates, chloroplasts are separated from a captured alga or diatom and used temporarily. These klepto (stolen) chloroplasts may only have a lifetime of a few days and are then replaced.

All content from Kiddle encyclopedia articles (including the article images and facts) can be freely used under Attribution-ShareAlike license, unless stated otherwise. Cite this article:
Chloroplast Facts for Kids. Kiddle Encyclopedia.