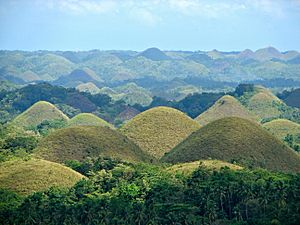 The Chocolate Hills in Bohol

The Chocolate Hills are a geological formation in Bohol Province, Philippines. There are at least 1,260 hills (and maybe more) spread over an area of more than 50 square kilometres (20 sq mi). They are covered in green grass that turns brown (like chocolate) during the dry season, hence the name.

The Chocolate Hills are a famous tourist attraction of Bohol. They are on the provincial flag and seal as natural attractions of the province. They are in the Philippine Tourism Authority's list of tourist destinations in the Philippines. They have been declared the country's third National Geological Monument and proposed for inclusion in the UNESCO World Heritage List.

The Chocolate Hills are conical karst hills similar to those seen in the limestone regions of Slovenia, Croatia, northern Puerto Rico, and Pinar del Río Province, Cuba. They probably started as corals growing in a warm, shallow sea about two million years ago. The hills consist of sandy to rubbly marine limestones. These limestones contain abundant fossils of foraminifera, coral, molluscs, and algae. These conical hills were created by limestone dissolving in rainfall and groundwater. There was erosion by rivers and streams after they were lifted above sea level. The hills are separated by flat plains and have numerous caves and springs. The Chocolate Hills are a remarkable example of conical karst topography. 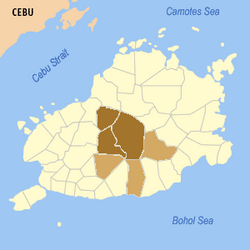 The Chocolate Hills form a rolling terrain of haycock hills – mounds of a generally conical and almost symmetrical shape. Estimated to be from 1,268 to about 1,776 individual mounds, these cone-shaped or dome-shaped hills are actually made of grass-covered limestone. The domes vary in sizes from 30 to 50 metres (98 to 164 ft) high with the largest being 120 metres (390 ft) in height. Bohol's "main attraction", these unique mound-shaped hills are scattered by the hundreds throughout the towns of Carmen, Batuan and Sagbayan in Bohol.

During the dry season, the grass-covered hills dry up and turn chocolate brown. This transforms the area into seemingly endless rows of "chocolate kisses". The branded confection is the inspiration behind the name, Chocolate Hills.

Three legends explain the formation of the Chocolate Hills.

The first tells the story of two feuding giants who hurled rocks, boulders, and sand at each other. The fighting lasted for days, and exhausted the two giants. In their exhaustion, they forgot about their feud and became friends, but when they left they forgot to clean up the mess they had made during their battle, hence the Chocolate Hills.

A more romantic legend tells of a giant named Arogo who was extremely powerful and youthful. Arogo fell in love with Aloya, who was a simple mortal. Aloya's death caused Arogo much pain and misery, and in his sorrow he could not stop crying. When his tears dried, the Chocolate Hills were formed.

The third legend tells of a town being plagued by a giant carabao, who ate all of their crops. Finally having had enough, the townsfolk took all of their spoiled food and placed it in such a way that the carabao would not miss it. Sure enough, the carabao ate it, but his stomach couldn't handle the spoiled food, so he defecated, leaving behind him a mound of feces, until he had emptied his stomach of the food. The feces then dried, forming the Chocolate Hills.

All content from Kiddle encyclopedia articles (including the article images and facts) can be freely used under Attribution-ShareAlike license, unless stated otherwise. Cite this article:
Chocolate Hills Facts for Kids. Kiddle Encyclopedia.