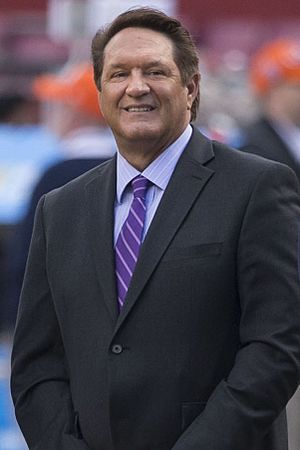 Chris Myers (born March 28, 1959) is a personality with Fox Sports and formally with ESPN and Tennis Channel.

For ESPN, he anchored SportsCenter, Baseball Tonight, and Up Close. For ESPN, he also covered, the National Basketball Association, college basketball, golf, and horse racing. He is a play-by-play announcer for Tampa Bay Buccaneers preseason games. He is a play-by-play for the NFL on Fox. He also does reporting for MLB on Fox and BCS on Fox. He also hosts Inside NASCAR. Myers called his first Major League Baseball game for Fox in July of 2012.

He was born in Miami, Florida now lives in Los Angeles. His son Christopher died in a car crash on February 16, 2012.

All content from Kiddle encyclopedia articles (including the article images and facts) can be freely used under Attribution-ShareAlike license, unless stated otherwise. Cite this article:
Chris Myers Facts for Kids. Kiddle Encyclopedia.