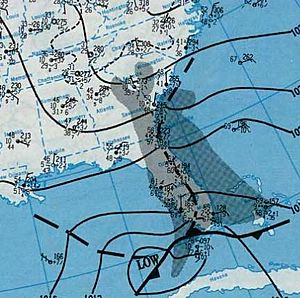 A map depicting a storm near Florida

The Christmas 1994 nor'easter was a strong cyclone along the East Coast of the United States and Atlantic Canada. It developed from an area of low pressure in the southeast Gulf of Mexico near the Florida Keys, and moved across the state of Florida.

Weather map of the interacting pair of cyclones during the morning of December 24, 1994

A weather system moved towards the southeast from the central Great Plains into the Deep South of the United States. After entering the Gulf of Mexico, the weather system became a cyclone. An approaching trough pushed the system across Florida. A forecaster at the National Hurricane Center, Jack Beven, said that "as it [the storm] moved out into the Bahamas, it appeared to take on the characteristics of a tropical storm." He also noted that because of the uncertainty, the National Hurricane Center did not call the weather system a tropical cyclone.

The cyclone was said to be a "hybrid" storm. The cyclone quickly gained strength in warm waters from the Gulf Stream, and because of cold air over the United States. The system continued to become stronger while moving within the Gulf Stream. The storm developed central atmospheric convection, which is unusual for a storm of its type. Extratropical cyclone. Also, the system developed an eye, which is usually seen in tropical cyclones. Even though the cyclone showed signs of a tropical storm, forecaster Jack Beven stated: "There was no front associated with it [the storm] and it had a warm core, but the radius of maximum winds was more than 150 nautical miles [175 mi, 280 km], so under the standard NHC criteria it didn’t qualify as a tropical storm." On December 23 and 24, the nor'easter intensified to attain a barometric pressure of 970|mb. Another low pressure system that developed behind the storm became stronger, and grew to be larger in size than the original storm. Due to the Fujiwhara effect, the large circulation of the secondary low moved the original nor'easter towards the northwest. The nor'easter passed along the south shore of Long Island, and it made landfall near New York City on December 24. Later, it moved over southeastern New York State. On December 25, which is Christmas Day, the system began to lose strength as it moved towards Nova Scotia, before the pair of low pressure systems moved out to sea early on December 26.

All content from Kiddle encyclopedia articles (including the article images and facts) can be freely used under Attribution-ShareAlike license, unless stated otherwise. Cite this article:
Christmas 1994 nor'easter Facts for Kids. Kiddle Encyclopedia.