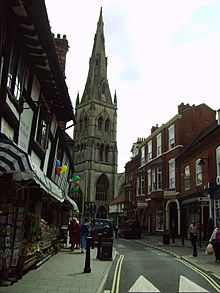 The Church of St Mary Magadalene, Newark-on-Trent is a parish church in the Church of England in Newark-on-Trent in Nottinghamshire. There has been a church on this site for nearly 1,000 years. The present church is built in the Gothic style, with parts dating from the 12th century. St Mary Magdalene's is one of the largest parish churches in England and is regarded as one of the finest. It is a Grade I listed building.

In the early 21st century, St Mary Magdalene's is an active parish church, with nine services per week and serving the community with youth and children's programs. The church has a bells, fine organ and a choir founded in 1532.

In his 2009 book England's Thousand Best Churches, Simon Jenkins awards St Mary's four stars and says: "Built over the two centuries of Perpendicular ascendancy after the Black Death, it piles high above its constricted urban site. A style so often dull is here exhilarating, the vistas mystic, the furnishings rich... The Nave is a wonder of proportion. Pevsner attributes this to the old Decorated plan, giving the aisles breadth, while the later masons added height."

The present church is the third on this site. A Saxon church stood on the site, in the manor of the Earl of Mercia, who died in 1057, and his wife Lady Godiva, but nothing of that structure now remains. Newark had been granted by the Earl to the monks of Stow.

In about 1180 the church was substantially rebuilt, with a crypt that still exists. The piers of the crossing, and the west tower date from circa 1220, with the spire being about 100 years later. The greater part of the church- the nave with its aisles and clerestory, and the chancel are 15th century, with transepts and chapels added in the early 16th century. The mid 19th century saw a thorough restoration by Sir George Gilbert Scott, and further restoration was made in the 20th century by Sir Ninian Comper and others.

The Church of St Mary Magdalene, Newark, is a large Gothic church, with aisled and clerestoried nave and chancel, transepts, and a single tower topped by a spire, at the western end. On the south side is a two-storey porch with a library over it. There is a vestry to the side of the south chancel aisle. The exterior has crenellated parapets, except, on the south aisle, where the west end terminates n a large gable and is set with a tall window, making the west front asymmetrical. The material is ashlar masonry.

The west tower, rises at the end of the nave, framed by the ends of the aisles. It dates from about 1220, and is in the Early English Gothic style, with simple lancet openings and arcading but set with a later large window with Perpendiciular tracery. The 14th century spire is octagonal and rises to (236 feet (72 m), the highest in Nottinghamshire and reputed to be the fifth tallest in the UK. There is a visible hole in the spire which is claimed to have been made by a musket ball during the Civil War.

For many years the clock in the tower of St Mary Magdalene's was the only chronicler of hours in the town with the exception of one at Nicholson's foundry. By the end of the 19th century it was erratic, and a new clock was gifted by the Mayor, Alderman B. Tidd Pratt, and set going on 14 July 1898. It has three 7-foot (2.1 m) diameter and one 9-foot (2.7 m) diameter roman gilded skeleton dials and a mechanism by Joyce of Whitchurch, dated 1898. It sounds Westminster Quarters. It was converted to electrical power, in 1971, by Smith of Derby, with direct drive on chime and strike and autowind on the going train.

The central piers remain from the previous church, dating from the 11th or 12th century. The upper parts of the tower and spire were completed about 1350; the nave dates from between 1384 and 1393, and the chancel from 1489.

The sanctuary is bounded on the south and north by two chantry chapels, the former of which has on one of its panels a remarkable painting from the Dance of Death. There are a few old monuments, and an exceedingly fine brass of the 14th century. 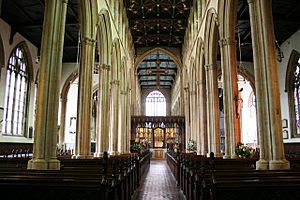 Interior view of the church

The library above south porch was presented by Bishop White in 1698. On the north wall hangs the oil painting The Raising of Lazarus by William Hilton RA. It was previously used as an altarpiece for the High Altar.

The church was designated a Grade I listed building, being of outstanding architectural or historic interest, on 29 September 1950.

The roofs of the whole of the south aisle, nave and chancel were restored between 1850 and 1852. The whole of the west window was revealed when the floor of the ringing chamber, formerly on a level with the transom of the window, was raised.

The church was heavily restored between 1853 and 1855 by Sir George Gilbert Scott. The plastered ceilings were removed, and replaced with oak. The galleries and pews were removed, the stonework of the pillars, arches and windows was cleaned and repaired. The floor was levelled and concreted and in the nave laid with black and red Minton tiles. The chancel was fitted with encaustic tiles. A new reredos in Ancaster stone replaced Hinton's picture, which was moved to the north transept. The screen had its paint removed, and was restored. The old stalls, miserere seats, and desks were repaired and restored. The organ was moved from the rood loft, and placed in the south chancel aisle, with an entry to the vestry through the middle of it. The windows of the nave and transepts were renewed with Hartley's rough plate glass in quarries. The walls of the nave were lined to the height of six feed with oak panelling. It re-opened for worship on 12 April 1855

The spire was damaged in a lightning strike in May 1894. The weather cock was re-instated on 22 August 1894 witnessed by a large crowd of spectators. The nave roof, south porch and spire were restored in 1913.

The church is supported by the Magnus Bequest, a charitable foundation created in the early 1530s by Thomas Magnus, who gave farms and lands in south Yorkshire, Lincolnshire and Nottinghamshire for a fourfold purpose: 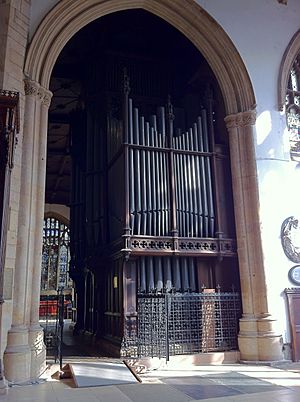 At the beginning of the 19th century a new organ, by George Pike England, with three manuals, was provided by the trustees of the Magnus, Brown's and Phyllypott's charities at a cost of £1,300. It was opened on 11 November 1804 by Thomas Spofforth.

It was placed on the west gallery from where the choir sang services. In 1814 the organ was re-located on the chancel screen and the choir returned to the chancel. In the 1850s the organ was rebuilt by Forster and Andrews of Hull, provided with a new case and again re-located, this time to its present position in the south choir aisle.

In 1866 the organ was rebuilt and enlarged by Henry Willis. Willis virtually doubled the size of the instrument and its case, creating a large Romantic four-manual organ. The organ was again rebuilt by William Hill & Sons in 1910 at the expense of Mrs Becher Tidd Pratt and family, and subsequently by Hill, Norman and Beard in 1924, 1938, 1964 and 1978 when it was rebuilt and more voices added.

It is now electrically operated by the Ellen Dynamic Transmission system which allows much greater mobility of the organ console, providing more direct contact with the congregation and the choir; it is the first four-manual instrument in the country to be so equipped, enabling a live performance to be electronically recorded and replayed automatically. 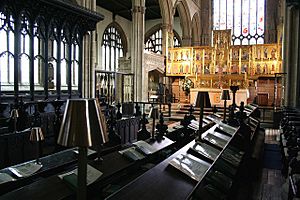 The choir stalls and high altar

The Choral Foundation was set up by Thomas Magnus in 1532 and was said to be the only existing pre-reformation choir outside cathedrals and Oxbridge colleges. Girl choristers were admitted into the main choir from 2008.

In February 2012 choral services stopped following the dismissal of the Master of the Song School. The choir was refounded in 2015. It has an emphasis on the training of young people, supported by the Magnus Bequest.

Masters of the Song School 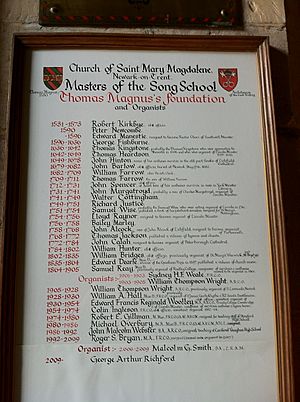 Masters of the Song School, the Magnus Foundation, Newark

There have been appointments since at least 1532. 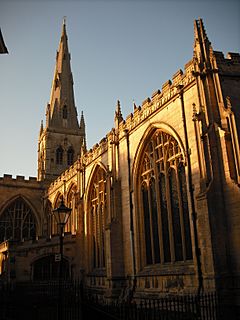 Tower and south of the church

The church hosts several concerts, including a "Music for Market" series at lunchtime on Saturdays.

All content from Kiddle encyclopedia articles (including the article images and facts) can be freely used under Attribution-ShareAlike license, unless stated otherwise. Cite this article:
Church of St Mary Magdalene, Newark-on-Trent Facts for Kids. Kiddle Encyclopedia.