Church of the Holy Angels, Hoar Cross facts for kids

The Church of the Holy Angels is an Anglican church in Hoar Cross, Staffordshire, England. It is a Grade I listed building.

It was built by the pious Anglo-Catholic, Emily Charlotte Meynell Ingram (sister of Charles Wood, 2nd Viscount Halifax) in memory of Hugo Francis Meynell Ingram who died in May 1871. The architects were George Frederick Bodley and Thomas Garner. Work started in 1872 and the church dedication took place on 22 April 1876. Further extension and additions took place until the church achieved its present form in 1906.

Since 2008, the Church has had received alternative episcopal oversight from the Bishop of Ebbsfleet, as the parish does not accept the ordination of women to the priesthood or episcopate. 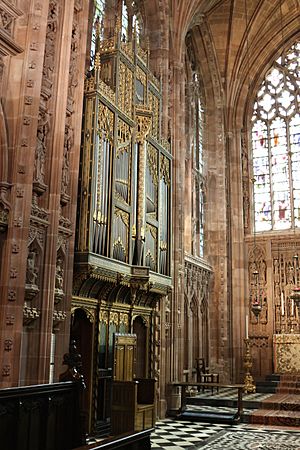 The organ was originally built by Samuel Green in 1779 for Bangor Cathedral. It was installed in Hoar Cross by Bishop and Son in 1876 and enlarged by Conacher in 1935. As a result of a very generous donation, it underwent extensive repair and finished at the end of 2012. An electronic organ was used temporarily for services. The specification of the pipe organ can be found on the National Pipe Organ Register at.

All content from Kiddle encyclopedia articles (including the article images and facts) can be freely used under Attribution-ShareAlike license, unless stated otherwise. Cite this article:
Church of the Holy Angels, Hoar Cross Facts for Kids. Kiddle Encyclopedia.