Cinnamon Toast Crunch (Known as Croque-Cannelle in French Canada, Curiously Cinnamon in the UK (previously Cinnamon Grahams), and as a different-tasting but similar-looking variant called Cini Minis in other European countries where available), is a brand cereal produced by General Mills and Nestlé. The cereal was first produced in 1984. Cinnamon Toast Crunch aims to provide the taste of cinnamon toast in a crunch cereal format. The cereal consists of small squares or rectangles of wheat and rice covered with cinnamon and sugar. Because of its rice content, when immersed in milk, one can hear "snap" sounds coming from it, similar to Rice Krispies. In most European countries the product is sold in boxes but in Poland and Russia the cereal is sold in bags. The product was originally marketed outside Europe with the mascot of a jolly baker named Chef Wendell, but was eventually retired and replaced with sentient Cinnamon Toast Crunch squares as mascots, who would often eat each other in commercials.

Originally the cereal featured plain squares but currently features artificial "cinnamon swirl" coloration in each piece. The cereal was originally invented and marketed by General Mills Assistant Product Manager, Elisabeth Trach. Starting in 1986 there were three animated bakers as the mascots.

"These little guys were cute bakers complete with chef hats and aprons. Wendell was the only baker that was named, and due to consumer feedback, we chose to feature him as the 'Cinnamon Toast Baker' where he has remained in this title role since 1991." 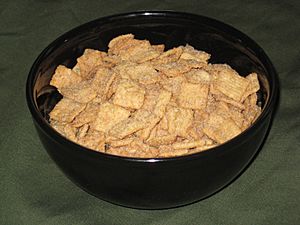 A bowl of Cinnamon Toast Crunch.

The cereal's original slogan was "I'm feeling like Cinnamon Toast Crunch tonight, honey." During this time, the three bakers were the mascots, it did not have a slogan, but it featured the three bakers singing the cereal's name with each baker singing one word in its title. Starting in 1995, it was given the slogan: "The taste you can see." In January 2007, Cinnamon Toast Crunch experimented with a new slogan, "It's That Intense," but switched back after poor reception. In 2009 the slogan became "Crave those crazy squares". For a limited time trying to appeal to adult-oriented programming, a campaign featured the slogan "The adult thing to do", mostly centering on their adult things going back to kids' stuff, including cereal.

All content from Kiddle encyclopedia articles (including the article images and facts) can be freely used under Attribution-ShareAlike license, unless stated otherwise. Cite this article:
Cinnamon Toast Crunch Facts for Kids. Kiddle Encyclopedia.