Cirque of the Towers facts for kids 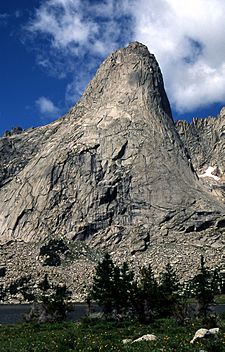 Cirque of the Towers (USGS)

The Cirque of the Towers is located in the Wind River Range Wyoming, U.S., part of which is in the Bridger Wilderness in Bridger-Teton National Forest, while the remainder is in the Popo Agie Wilderness in Shoshone National Forest. Located in the southern section of the Wind River Range (or "Winds" for short), the cirque is a very popular destination for technical rock climbers. Climber Orrin Bonney gave the area its current name in 1941 after his survey of the cirque. Prior to this, few if any visitors had ventured into the cirque due to the remote location. The cirque is an almost circular hole or valley carved by a glacier that retreated over 8,000 years ago. As is true with the rest of the Winds, the mountains are composed almost entirely of granite. The Continental Divide spans the crest of the main peaks.

The towers average 1,000 feet (300 m) lower in altitude than the highest mountains in the northern Winds, with Lizard Head Peak (12,847 ft (3,916 m)) being the tallest. Other individual mountains in the cirque include Shark's Nose, Warbonnet, Warrior Peak, Wolf's Head and Pingora Peak. There are hundreds of routes to choose from in difficulties ranging from 5.1 to 5.11a and since the mountains are composed primarily of granite rock, there is good anchoring. These climbs include two featured in Steck and Roper's Fifty Classic Climbs of North America the Northeast Face of Pingora (IV, 5.9) and the East Ridge of the Wolf's Head (III, 5.6).

For both the climber and backpacker, access to the cirque from the west from Pinedale, Wyoming requires a 55 mi (89 km) drive, partly paved and partly gravel, to the Big Sandy trailhead. There is a small National Forest campground at the trailhead. An 8.7 mi (14.0 km) hike beginning at 9,000 ft (2,700 m) above sea level is relatively level the first 7 mi (11 km) and becomes very steep the last mile (1.6 km) and ascends to Jackass Pass at 10,800 ft (3,300 m), crossing the continental divide. From there one must descend a steep half mile (800 m) to Lonesome Lake, which is one of four lakes in the cirque. Expect the trail to be busy in July and August as the cirque is the most popular hiking and climbing destination in the Wind River Range. Lonesome Lake was the first lake in the Wind River Range whose water was deemed unfit for consumption due to human waste and consequently, no camping is permitted within a quarter mile (400 m) of the lake. The granitic rocks allow poor filtration of ground water and the ability of many alpine lakes to cleanse themselves is often poorer than one might find at lower altitudes.

All content from Kiddle encyclopedia articles (including the article images and facts) can be freely used under Attribution-ShareAlike license, unless stated otherwise. Cite this article:
Cirque of the Towers Facts for Kids. Kiddle Encyclopedia.