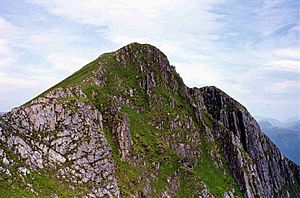 The steep approach to Ciste Dhubh‘s summit up the south ridge.

Ciste Dhubh is a mountain in the Scottish Highlands between Glen Shiel and Glen Affric. It is far from any centres of population, with Kyle of Lochalsh being almost 30 kilometres (19 mi) away to the west-northwest.

The mountain reaches a height of 979 metres (3,212 ft) and is classed as a Munro and a Marilyn hill. It is generally associated with the Glen Shiel mountains to the west, although it is the most isolated of that group and is often climbed separately. Ciste Dhubh translates from the Gaelic as “Black Chest”; one possible explanation of this is that the mountain's summit rocks often show as dark in colour when viewed from a distance even in good light conditions (see picture). The mountain should not be confused with another Munro, Sgurr na Ciste Duibhe, seven kilometres (4.3 mi) to the west.

Ciste Dhubh has a prominent pointed peak with flanks which are predominantly grassy with some craggy areas on its northern slopes. The summit is precipitous and rocky, and the southern ridge is steep and in places quite narrow, it offers few dangers for walkers but care is needed in high winds or under winter conditions. The mountain also has ridges to the north west and north which descend to upper Glen Affric. There are two small corries on either side of the northern ridge. Ciste Dhubh falls to deep glens on all sides except to the south where the mountain is connected to the adjoining Munro of Aonach Meadhoin by a col with a height of 591 metres called the Bealach a’ Choinich (Pass of the Bog). This pass, which lives up to its translated name, is strategically important as it also connects to the adjacent Corbett of Am Bathach and is vital to the walker who wants to climb the mountain with either or both of these adjoining hills.

All drainage from Ciste Dhubh finds its way to the east coast of Scotland over 80 kilometres (50 mi) away. This is surprising for a mountain which stands only 15 kilometres (9.3 mi) from Loch Duich on the west coast. The mountains north, east and west flanks fall into deep valleys which contain the streams which form the head waters of the River Affric and takes water away north east to the Beauly Firth. Drainage from the southern slopes of the mountain goes south to Loch Cluanie and then east via the River Moriston and Loch Ness to the Moray Firth.

The most common ascent of Ciste Dhubh starts on the A87 road just east of the Cluanie Inn on the shores of Loch Cluanie at grid reference NH082118. From there it is a four-kilometre (2.5 mi) walk up the valley of the Allt a’ Chaorainn Bhig to reach the Bealach a’ Choinich; an alternative way of reaching this bealach is by climbing the Corbett of Am Bathach which stands to the east of the valley. From the bealach it is a steep ascent up grassy slopes until the southern ridge is reached which is followed to Ciste Dhubh’s rocky summit. It is possible to ascend the mountain from the Alltbeithe youth hostel in upper Glen Affric by climbing the northern ridge.

The return to Loch Cluanie can include the adjoining Munro of Aonach Meadhoin, which is a 400-metre (1,300 ft) ascent from the Bealach a’ Choinich. The view from the top of Ciste Dhubh is good: the mountain is surrounded by higher peaks but none of them are too close (Ciste Dhubh has a prominence of 388 metres (1,273 ft)) and the nearby mountains of Mullach Fraoch-choire, A' Chràlaig and Sgurr nan Ceathreamhnan are well seen in detail.

All content from Kiddle encyclopedia articles (including the article images and facts) can be freely used under Attribution-ShareAlike license, unless stated otherwise. Cite this article:
Ciste Dhubh Facts for Kids. Kiddle Encyclopedia.