Clécy is a French Commune in the Calvados department in the Normandy region in northwestern France.

In 1932 it was awarded the title The Capital of Norman Switzerland by the Tourism Minister Monsieur Gourdeau.

Called the "Capital of Norman Switzerland", this village owes its fame to the rugged and verdant Armorican massif, with valleys through which the Orne flows. Its inhabitants are called Clécyens. 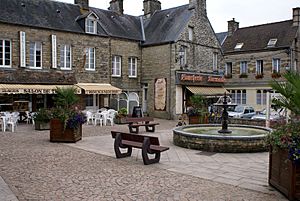 All content from Kiddle encyclopedia articles (including the article images and facts) can be freely used under Attribution-ShareAlike license, unless stated otherwise. Cite this article:
Clécy Facts for Kids. Kiddle Encyclopedia.