Clements Mountain (8,765 feet (2,672 m)) is located in the Lewis Range, Glacier National Park in the U.S. state of Montana. Clements Mountain rises to the west of Logan Pass and above the Hidden Lake Trail which leads to Hidden Lake just west of the continental divide. The peak was named after Walter M. Clements who had worked to set up a treaty between the Blackfeet and the U.S. Government for the purchase of tribal lands east of the continental divide which later became part of the park.

Like other mountains in Glacier National Park, Clements Mountain is composed of sedimentary rock laid down during the Precambrian to Jurassic periods. Formed in shallow seas, this sedimentary rock was initially uplifted beginning 170 million years ago when the Lewis Overthrust fault pushed an enormous slab of precambrian rocks 3 mi (4.8 km) thick, 50 miles (80 km) wide and 160 miles (260 km) long over younger rock of the cretaceous period. 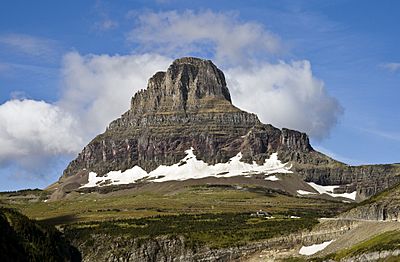 All content from Kiddle encyclopedia articles (including the article images and facts) can be freely used under Attribution-ShareAlike license, unless stated otherwise. Cite this article:
Clements Mountain Facts for Kids. Kiddle Encyclopedia.