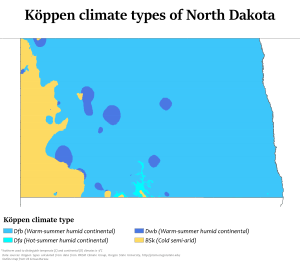 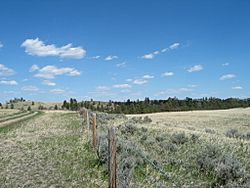 Western North Dakota lands along Interstate 94 in North Dakota. With an average 17 inches of precipitation a year, North Dakota is one of the driest states in the United States.

North Dakota's climate is typical of a continental climate with cold winters and hot summers. The state's location in the Upper Midwest allows it to experience some of the widest variety of weather in the United States, and each of the four seasons has its own distinct characteristics. The eastern half of the state has a humid continental climate (Köppen climate classification Dfb) with warm to hot, somewhat humid summers and cold, windy winters, while the western half has a semi-arid climate (Köppen climate classification BSk) with less precipitation and less humidity but similar temperature profiles. The areas east of the Missouri River get slightly colder winters, while those west of the stream get higher summer daytime temperatures. In general, the diurnal temperature difference is prone to be more significant in the west due to higher elevation and less humidity. 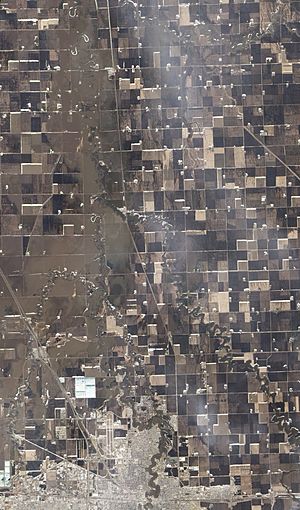 Flooding in North Dakota in March 2010.

Due to its location in the center of North America North Dakota experiences temperature extremes characteristic of a continental climate, with cold winters and mild to hot summers. Each season has distinctive upper air patterns which bring different weather conditions with them. One feature of a continental climate is that weather patterns can be unpredictable. For example, an Alberta clipper, a low pressure system originating in the province of Alberta in Canada, would be a common winter occurrence in North Dakota. But with the general unpredictability of weather in a continental climate, such a storm system could occur in spring, or in late autumn. Hot weather, though usually confined to July and August, can sometimes begin as early as April or May, and could spill over into September or October.

North Dakota is far from major sources of moisture and is in the transition zone between the moist East and the semi-arid West, as precipitation and humidity decrease from east to west. Annual average precipitation across the state ranges from around 14 in (35.6 cm) in the west to 22 in (55.9 cm) in the east. Snow is the main form of precipitation from November through March, while rain is the most common the rest of the year. It has snowed in North Dakota during every month except July and August.

Winter in North Dakota is characterized by cold (below freezing) temperatures and snowfall. Snow is the main form of winter precipitation, but freezing rain, ice, sleet, and sometimes even rain are all possible during the winter months. Common storm systems include Alberta clippers or Panhandle hooks, some of which evolve into blizzards. Annual snowfall averages from 26 inches (66 cm) in the central part of the state to 38 inches (96.5 cm) in the northeast and southwest. Temperatures as low as −60 °F (−51 °C) have occurred during North Dakota winters.

Spring is a time of major transition in North Dakota. Early spring commonly sees snowstorms, but by late spring as temperatures begin to moderate the state can experience tornado outbreaks, a risk which diminishes but does not cease through the summer and into the fall as North Dakota lies at the northern edge of Tornado Alley. Springtime flooding is a relatively common event in the Red River Valley, due to the river flowing north into Canada. The spring melt and the eventual runoff typically begins earlier in the southern part of the valley than in the northern part. The most destructive flooding in eastern North Dakota occurred in 1997, which caused extensive damage to Grand Forks.

Summer sees heat and humidity predominate in the east, while hotter and less humid conditions are generally present in the west. These humid conditions help kick off thunderstorm activity 22–34 days a year. Summer high temperatures in North Dakota average in the mid 80s (30 °C) in the west to the upper 70s (25 °C) in the east, with temperatures as hot as 121 °F (49 °C) possible. The growing season in North Dakota usually begins in April, and harvest begins in September and October. Tornadoes are possible in North Dakota from April through October, but the peak tornado month is July, followed by June and August. The state averages 13 tornadoes per year. Depending on location, average annual precipitation ranges from 14 in (35.6 cm) to 22 in (55.9 cm).

Autumn weather in North Dakota is largely the reverse of spring weather. The jet stream, which tends to weaken in summer, begins to re-strengthen, leading to a quicker changing of weather patterns and an increased variability of temperatures. By late October and November these storm systems become strong enough to form major winter storms. Fall and spring are the windiest times of the year in North Dakota.

All content from Kiddle encyclopedia articles (including the article images and facts) can be freely used under Attribution-ShareAlike license, unless stated otherwise. Cite this article:
Climate of North Dakota Facts for Kids. Kiddle Encyclopedia.