Colyton first appeared as an ancient village around 700 AD and features in the Domesday Book as 'Culitone'. The third code of law of King Edmund I was issued at Colyton in about 945. This helped to stabilize feudal society, by stating clearly its four pillars: kingship, lordship, family, and neighbourhood. It grew into an important agricultural centre and market town with a corn mill, saw mill, iron foundry and an oak bark tannery that is still functioning. Situated 0.5 miles (0.8 km) to the north of the town was Colcombe Castle, now demolished, a former seat of the Courtenay family, Earls of Devon.

Following the attainder of the Marquis of Exeter the Courtenay lands escheated to the Crown, and those within Colyton were sold back for £1,000 to various residents of Colyton parish, as listed in a deed transcribed in the Letters and Papers of Henry VIII dated 6 January 1547, summarised as "John Clarke and others. Grant in free socage, subject to rents etc. (specified), for l,000l., of the following lands (extents given) in the parish of Colyton, which are parcels of Colyton manor, Devon, and belonged to Henry Marquis of Exeter, attainted". This was the origin of the Feoffees of Colyton, who continued to hold in common various properties in the parish.

It was called the "most rebellious town in Devon" due to the number of its inhabitants who joined the Monmouth Rebellion in 1685. 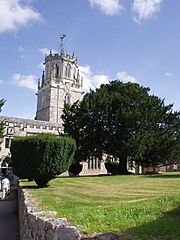 The Church of England parish church of St Andrew's, is a Grade I listed building. A Saxon church occupied the site of St Andrew's until replaced by the present Norman church in the 11th century. The 14th century octagonal lantern tower is said to have been used as a beacon for ships on the once navigable River Axe, to the east, although there is doubt that the tower may be seen at all from the river. The nearby vicarage dates from 1529.

Colyton Grammar School dates from 1546 and once occupied the part-medieval building now known as the Old Church House. In 1927 it moved to Colyford, a small village within the Colyton parish. The school has made headlines in recent years as the first school to 'opt out' of local authority control and gain grant-maintained status and for achieving very high rankings in national examination league tables.

The Seaton Tramway terminates at nearby Kingsdon on the other side of the River Coly and the town is on the route of the East Devon Way footpath.

Historic estates within the parish include:

All content from Kiddle encyclopedia articles (including the article images and facts) can be freely used under Attribution-ShareAlike license, unless stated otherwise. Cite this article:
Colyton, Devon Facts for Kids. Kiddle Encyclopedia.