Kids Encyclopedia Facts
This page is about Como Park as a whole. For the zoo itself, see Como Zoo.

The Como Park Zoo and Marjorie McNeely Conservatory (or just Como Zoo and Conservatory) are located in Como Park at 1225 Estabrook Drive, Saint Paul, Minnesota. The park, zoo and conservatory are owned by the City of Saint Paul and are a division of Saint Paul Parks and Recreation. Its attractions include the zoo, the conservatory, an amusement park, a carousel, Lake Como, a golf course, a pool and more. The park receives more than 1.9 million visitors annually. Como Park is a free park and while no admission fee is charged for the zoo or conservatory, voluntary donations of $3 per adult and $2 child are suggested. 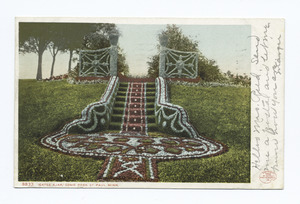 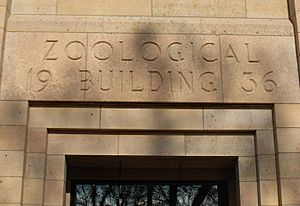 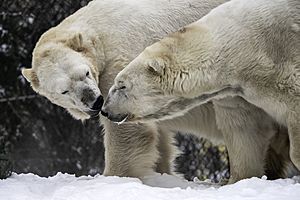 The first zoo in Saint Paul was on Harriet Island when in 1897, the city of St. Paul received a gift of three deer. Additional animals followed, when more room was needed to house the animals they were moved to facilities at Como Park. Como Zoo continued to grow through donations of animals and money.

The Art Deco Zoological Building was designed in 1936 by Charles Bassford as part of the federally funded Works Progress Administration. Other WPA structures were completed in the 1930s, including Monkey Island (now Seal Island), barn and bear grotto.

In the 1980s several new exhibits were added as part of a major renovation project, including the Large Cat exhibit (1980), Aquatic Animal Building and conversion of Monkey Island to Seal Island (1982), the Primate Facility (1985), the Land and Water Bird exhibit (1986) and the African Hoofed Stock Facility (1987).

A new Polar bear exhibit was finished in 2010. The two twin Polar bear brothers (Buzz and Neil) returned from their temporary stay in Canada. The exhibit includes a shallow and deep pool plus a middle room. It also has a back room where the Polar bears can choose to stay in the AC.

On May 13, 1994 Casey the gorilla, 400 pounds, scaled the wall of his enclosure and wandered free around the zoo for 45 minutes. Visitors were ushered to safety as zoo staff shot Casey with a tranquilizer and returned him to his enclosure. This resulted in the zoo building a temporary slanted wall around the enclosure to keep this from happening again and the zoo is planning on building a new area for the gorillas making it safer and impossible to escape from. The zoo opened a new exhibit in 2013 called Gorilla Forest. Casey has since been moved to the Audubon Zoo in New Orleans.

The Marjorie McNeely Conservatory (0.5 acres) was first opened to the public in November 1915. This facility is open to the public every day of the year. It includes the following gardens and galleries:

The conservatory was added to the National Register of Historic Places in 1974.

During the spring flower display at the Sunken Garden.

Art at the Marjorie McNeely Conservatory

All content from Kiddle encyclopedia articles (including the article images and facts) can be freely used under Attribution-ShareAlike license, unless stated otherwise. Cite this article:
Como Park Zoo and Conservatory Facts for Kids. Kiddle Encyclopedia.