Como Zoo was the first zoo established in Minnesota. Founded in 1897, the zoo is located within Como Park, in Saint Paul, Minnesota. Como Zoo is a member of the Association of Zoos and Aquariums (AZA).

Como Zoo was founded in 1897 when the city of Saint Paul received a donation of three deer and provided a simple fenced in pasture for the animals.

In 1902, the animal collection at Como Zoo was expanded to include animals native to Minnesota such as elk, moose, foxes, and two cebus cattle. The zoo also received donations of pets, such as a parrot, two Mexican red birds and a monkey.

In 1915, the zoo received a donation of two bison from the future Lieutenant Governor of Minnesota Thomas Frankson. Also, in 1915, the Como Park's Marjorie McNeely Conservatory was built. The conservatory was used as a warm winter home for the animals.

In 1926, Como Zoo received the donation of an American black bear named Peggy. Her cage was built out of old iron arches already at the zoo.

The 1930s brought exotic animals to the zoo. Monkey Island was built in 1932, followed by the bear grottos, and the Main Zoological building in 1936. Along with these changes came many exotic animals from the Longfellow Gardens zoo, which closed in 1934.

In the 1940s, the zoo expanded once again to include paved parking lots, a Kiddie Zoo, and a raccoon pit which later became prairie dog hill.

The 1950s brought even more changes to the zoo including Rabbitville which later was expanded into a Children's Farm Zoo. In 1955, the city officials recommended the closing of Como Zoo because the zoo and city did not have the funds to support the zoo. Soon after a Citizen Volunteer Committee was formed to help save the zoo. In 1956, through the efforts of a rich Minnesotan business man, Archie's Brand Seal Show arrived at the zoo. Along with this many repairs were brought to the zoo, which brought new animals such as ostriches, jaguars, seals, llamas, baboons and monkeys. In 1957, a number of endangered animals joined the zoo including Siberian tigers, gorillas, and orangutans. In 1958, Toby, a Galapagos tortoise comes to live at the zoo. Small children were allowed to ride on Toby's back. Also, in 1958, the first Siberian tigers to be raised successfully in captivity were born at Como Zoo. In 1959, Casey the gorilla arrived at the Como Zoo and the Como Mobile Zoo started visiting local schools.

The 1960s brought what seemed to be the end of Como Zoo. In 1966, the Metropolitan Zoo Report of the Citizen's League decided that Como Zoo could not become a major zoo facility, so planning for the Minnesota Zoo began. With this, many people thought that Como Zoo would close, but, in 1969, the zoo built its original primate house where the one now stands, and brought in two new lowland gorillas named Don and Donna. In 1969, the zoo was saved once again by citizens who rallied to raise funds for the zoo.

In January 1972, zoo keepers were forced to shoot Whitey, a male polar bear, to save a midnight visitor who fell into the bear grotto. In 1974, the zoo's favorite Galapagos tortoise, Toby, was moved to the Honolulu Zoo, where he still lives today. In 1976, a new Master Plan was developed to revitalize the zoo, and the State Legislature granted the zoo $8.5 million for the redevelopment process. 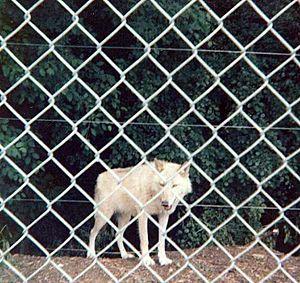 The 1980s marked the beginning of new buildings at the zoo, which started in 1980 with the opening of the Large Cats exhibit. In 1982, the zoo opened its new Aquatic Animal building to the public. Other additions included a new polar bear exhibit, a new show amphitheater for the Sparky the Seal Lion Show, and the conversion of Monkey Island to Seal Island. Along with this came Casey II, the grandson of the Como's original Casey from Gladys Porter Zoo in Brownsville, Texas. In 1985, Como Zoo's Primate House was rebuilt, housing gorillas, orangutans, lemurs, monkeys, and tamarins. In 1986, the new Land Bird and Water Fowl exhibit was completed with a large outdoor pool and waterfall. In 1988, the African Hoof Stock exhibit, the final exhibit from the zoo's 1970s master plan, was completed; it contained giraffes, zebras, ostriches, and two type of antelope.

In 1994, Don, the gorilla, died and Casey II jumped out of his exhibit and took a short stroll in the park before jumping back into his enclosure. With this, came plans for a new and improved gorilla exhibit which made the walls straight up and down instead of slanted. Casey II was later moved to the Audubon Zoo in New Orleans.

In 2008, the zoo's giraffes had a baby. The baby had some problems walking and almost died before it was moved to the University of Minnesota for special treatment. Now, the baby giraffe has returned to the zoo and is on exhibit with its parents. Also, the building of the new Polar Bear Odyssey started removing the old bear grottoes to make a polar bear exhibit seven times larger than the original.

The opening of the Polar Bear Odyssey marked the start of the 2010s decade. The zoo's newest exhibit, Gorilla Forest, opened in 2013. It is home to Schroeder, a 500-pound silverback male, 3 female companions for him, and a bachelor group of three other males.

Permanent exhibits at the zoo that have been replaced over the years include Prairie Dog Hill, The Raccoon Pit, Monkey Island, Rabbitville, Children's Farm Zoo, Kiddie Zoo, Deer Pasture, and the 1936 Zoological Building.

The bird yard is the first thing visitors of the zoo see after they leave the visitor center. The bird yard contains a large pool, waterfall, and a mill house with a water wheel. The exhibit has large rocks separating the birds from two large galapagos tortoises. Animals in the exhibit include Caribbean flamingos, Chilean flamingos, Galapagos tortoises, mallard ducks, red-breasted geese, ruddy ducks, common shelducks, swan geese, and white-faced whistling ducks.

Monkey Island was re-renovated into Seal Island in 1982, and is home to harbor seals and California sea lions.

The large cats exhibit was finished in 1982 and moved the large cats out of the small, original zoological building into larger pastures. Cats in this exhibit include, Siberian tigers, lions, snow leopards, and cougars.

The Aquatic building was created in 1985, and is home to black-footed penguins, lined seahorses, mudpuppies, tufted puffins, giant archerfish, and African cichlids

The African Hoof Stock exhibit was part of the 1970s zoo master plan and was finished in the mid 1980s. Animals in this exhibit include Grant's zebras, reticulated giraffes, greater kudu, black crowned cranes, and ostriches.

The old hoof stock building is one of the oldest exhibits at the zoo, and is home to American bison, Dall's sheep, Arctic foxes, and reindeer.

Wolf Woods is a forested enclosure that is home to two gray wolves.

The Polar Bear Odyssey opened in 2010 and is home to the zoo's polar bears. It replaces the old bear grottoes, and is four times the size of the old polar bear exhibit. An inside viewing area lets visitors view the bears swimming and the bears' indoor facility. The viewing area includes interactive computers that show how the world is changing, including the glacier ice caps in the Arctic.

The Sparky the Sea Lion Show is performed by Sparky, a California sea lion, and his trainer. In 2006, the Sparky Show celebrated its 50th year anniversary. In these fifty years there have been six different Sparkys.

A larger seal/sea lion habitat is scheduled for 2017.

All content from Kiddle encyclopedia articles (including the article images and facts) can be freely used under Attribution-ShareAlike license, unless stated otherwise. Cite this article:
Como Zoo Facts for Kids. Kiddle Encyclopedia.