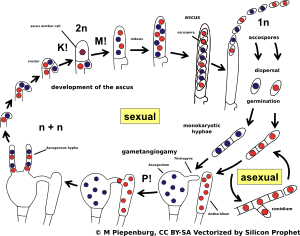 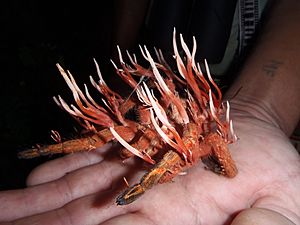 A member of the genus Cordyceps which is parasitic on arthropods. Note the elongated stromata

Cordyceps is a genus of ascomycete fungi (sac fungi) with about 400 species. Most Cordyceps species are parasitoids. They are parasitic mainly on insects and other arthropods. A few are parasitic on other fungi. The generic name Cordyceps is taken from the Greek word κορδύλη kordýlē, meaning "club", and the Latin stem -ceps, meaning "head".

The genus has a worldwide distribution. Most of the 400 species have been described from Asia (notably Nepal, China, Japan, Bhutan, Korea, Vietnam, and Thailand). Cordyceps species are particularly abundant and diverse in humid temperate and tropical forests.

All content from Kiddle encyclopedia articles (including the article images and facts) can be freely used under Attribution-ShareAlike license, unless stated otherwise. Cite this article:
Cordyceps Facts for Kids. Kiddle Encyclopedia.