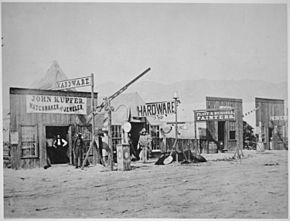 Corinne is a city in Box Elder County, Utah, United States. The population was 685 at the 2010 census.

Corinne is located in southeastern Box Elder County, on the west side of the Bear River. It is the last town on the river before it enters the marsh complexes leading to the Great Salt Lake. Brigham City is 6 miles (9.7 km) to the southeast, and Bear River City is 5 miles (8 km) to the north.

For almost ten years from its founding on 25 March 1869, the town of Corinne prospered as the unofficial "Gentile Capital of Utah". As the Union Pacific and Central Pacific railroads approached their historic meeting place at Promontory Summit early in 1869, a group of former Union Army officers and some determined non-Mormon merchants from Salt Lake City decided to locate a Gentile town on the Union Pacific line, believing that the town could compete economically and politically with the Saints of Utah. They chose a location about six miles west of Brigham City on the west bank of the Bear River where the railroad crossed that stream. Named by one of the founders (General J. A. Williamson) for his fourteen-year-old daughter, Corinne was designed to be the freight-transfer point for the shipment of goods and supplies to the mining towns of western Montana along the Montana Trail.

In its heyday Corinne had some 1,000 permanent residents, not one of whom was a Mormon, according to the boast of the local newspaper. As an end-of-the-trail town, Corinne reflected a very different atmosphere and culture from the staid and quiet Mormon settlements of Utah, containing not only a number of commission and supply houses but also fifteen saloons and sixteen liquor stores, with an elected town marshal to keep order in this "Dodge City" of Utah. The permanent residents of Corinne did their best to promote a sense of community pride and peaceful, cultural pursuits but had a raucous and independent clientele of freighters and stagecoach drivers to control.

With some support from political leaders in the nation's capital and from eastern newspapers, the town fathers attempted to use their position as a Gentile city to break the political and economic monopoly held by the Mormons in Utah Territory. They sought to have J. A. Williamson named territorial governor, tried to have the northern one degree of latitude of Utah added to Idaho so as to dismember the territory, and attempted to have Corinne named as the capital of Utah. The citizens of Corinne failed in each case to achieve their wishes, although their leaders and newspapers bombarded Washington, D.C. for help in their fight with Brigham Young and the Mormon hierarchy. The Saints had no difficulty in this unequal fight, even awarding the ballot to Utah women to ensure maintenance of political control of the territory.

First meeting in Corinne in 1872, Corinne Lodge No.5 was chartered as the first Utah Masonic Lodge north of Salt Lake City on November 11, 1873, by the Grand Lodge of Free and Accepted Masons of Utah. Edmond P. Johnson, the first Master of the Lodge and a past jurisdictional judge in Box Elder County, along with many other prominent Masons of the day, are buried in the Corinne City Cemetery.

Brigham Young assured the demise of Corinne when he and the Mormon people built the narrow-gauge Utah Northern Railroad from Ogden to Franklin, Idaho. Although construction of the line beyond that point ceased for four years as a result of the Panic of 1873, in the autumn of 1877 the Union Pacific bought the spur line and began pushing it northward through Idaho. The tracks reached Marsh Valley and cut the Montana Trail at that place, thereby supplanting wagon traffic from Corinne with rail transport from Ogden. The Gentile merchants soon abandoned Corinne in favor of Ogden or the terminus of the rail line, while Mormon farmers moved in to buy the land around Corinne and make it into another Mormon settlement.

In 1877 an LDS ward was organized, but was dissolved when the town suffered a decline in population. As farmers again settled the region, a Corinne Ward was again organized; during the interim it was part of the Bear River Ward. A meetinghouse was built in 1914, and the Corinne Ward was reorganized that year with Alma Jensen as Bishop.

There were 190 households of which 46.3% had children under the age of 18 living with them, 72.6% were married couples living together, 6.3% had a female householder with no husband present, and 16.3% were non-families. 15.8% of all households were made up of individuals and 7.4% had someone living alone who was 65 years of age or older. The average household size was 3.27 and the average family size was 3.64.

All content from Kiddle encyclopedia articles (including the article images and facts) can be freely used under Attribution-ShareAlike license, unless stated otherwise. Cite this article:
Corinne, Utah Facts for Kids. Kiddle Encyclopedia.