Cossack is an historic ghost town located 1,480 km north of Perth and 15 km from Roebourne in the Pilbara region of Western Australia. The nearest town to Cossack is Wickham.

Cossack is located on Butchers Inlet at the mouth of the Harding River. It is reached by a single, sealed road that follows the original causeway across a series of tidal salt flats. The overall landform of the region around Cossack is a low, flat plain with occasional rocky hills and ranges. The vegetation is mainly grass, spinifex and low shrub, with occasional trees (mangroves) along watercourses and in gullies. The mangrove scrub becomes quite dense along the shoreline and at the mouth of the inlet.

The main road from Roebourne to Cossack continues past the town of Wickham and the Cape Lambert iron ore port (operated by Pilbara Iron), and terminates at the fishing town of Point Samson. The townsite is not visible from the main road, and only becomes apparent as the road rounds Nanny Goat Hill.

The site of the former town is defined by Nanny Goat Hill, Tien Tsin Lookout, the hilly ground to the north-east and north-west, and Butchers Inlet to the east and south-east. Past the townsite, the road winds up to the Reader Head Lookout, from which sweeping views of the surrounding coastline can be seen. Many of the buildings are listed by the National Trust. 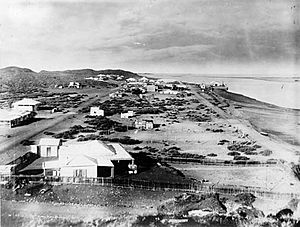 In May 1863, Walter Padbury landed his stock at the mouth of the Harding River near the present site of Cossack. Cossack was first known as Tien Tsin Harbour, after the barque that carried Padbury and his party. The ship that brought the state's Governor, Frederick Weld, in December 1871 was named HMS Cossack and the town adopted this name in 1872. Cossack was the first port in the North West, and was critical to the development of the pastoral industry in the region.

In 1866 the town of Roebourne was declared, and the pearling industry began in the region. Cossack was the birthplace of Western Australia’s pearling industry and was the home of the colony’s pearling fleet until the 1880s. Many small boats off the Port Walcott coast dived for pearl shell during the 1860s using Aboriginal labour, including women and children. By early 1869, there were 14 small vessels pearling in the area, with an average crew of three Europeans and six Aboriginals. By the early 1870s up to 80 luggers were operating in the area. The pearling industry also attracted a large Asian population. By 1895, there were 989 Malays and 493 Aboriginals employed on 57 vessels at Cossack. The high number of Asians in the industry, including Japanese and Chinese as well as Malay, led to the establishment of an Asian quarter known as ‘Chinatown’.

In 1881 a cyclone damaged the town, and every pearling vessel then operating either foundered or was beached. In 1885, 44 vessels were operating out of Cossack. In that year a parliamentary select committee recommended the closure of several pearling banks in the area due to depletion. In 1886, the main pearling industry moved to Broome.

In the 1920s there was still a Japanese shop in Cossack, run by pearling brothers Jiro and T. Muramats

During the 1870s, a causeway was built across the tidal salt flats that separate Cossack from the main road. The causeway still forms the only access to the town from land.

A horse-drawn tramway between Roebourne and Cossack was completed in 1887, the same year that the municipality of Cossack was declared, and the north-west gold rush commenced.

The main stone buildings were constructed in the 1880s. Administrative and other public buildings built there in the 1890s continued a style adopted by the emerging state; these have been surveyed by state heritage groups and determined to be architecturally and historically significant.

Around the turn of the century there were two hotels in Cossack: the Weld (named after the Governor) and the White Horse (opposite the wharf).

Decline of the township

Following the move of the pearling industry to Broome and the decline of the gold rush, the population of Cossack dwindled. The harbour proved unsuitable for the larger ships of the early 20th century. Between 1902 and 1904, a jetty was constructed at the nearby hamlet of Point Samson. In 1910, the port moved there and the municipality of Cossack was dissolved. In 1913 a leprosarium was established on the other side of the river, moving to Darwin in 1930. Wool bales and pearls would be loaded on to a lighter for transport to ships 3 miles off shore which would take the cargo to England. Inhabitants of the town in the early twentieth century included Greeks and other Europeans, Japanese, Malays, Timorese, Koepangers and Aru Islanders. The town was abandoned in the 1950s.

The region is subject to violent storms and cyclones and was severely damaged at different times in its history. Its use as a port for the profitable pearling industry and other economic booms saw investment and backing from Perth and it remained an important northern port. The town was abandoned after the 1940s, leaving substantial stone buildings in a state of disrepair. The state government established a survey, in 2007, into the potential for restoration or revitalisation of this remote town.

All content from Kiddle encyclopedia articles (including the article images and facts) can be freely used under Attribution-ShareAlike license, unless stated otherwise. Cite this article:
Cossack, Western Australia Facts for Kids. Kiddle Encyclopedia.