Cox Run is a tributary of Little Muncy Creek in Lycoming County, Pennsylvania, in the United States. It is approximately 2.3 miles (3.7 km) long and flows through Moreland Township, Wolf Township, and Muncy Creek Township. The watershed of the stream has an area of 1.20 square miles (3.1 km2). Cox Run itself flows through a valley known as Neufer Hollow and is designated as a Coldwater Fishery. A streambank stabilization project along the stream was proposed in 2008. 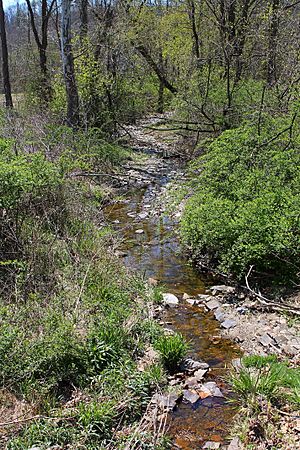 Cox Run begins in a valley to the east of Buck Hill in Moreland Township. It flows south for a few tenths of a mile before turning south-southwest, still flowing through its valley alongside Buck Hill. The stream then receives an unnamed tributary from the left before turning southwest for more than a mile. In this reach it flows between Buck Hill and Tommy Hill and receives another unnamed tributary from the left, passing through Wolf Township, and entering Muncy Creek Township. It eventually reaches the end of its valley and turns south-southwest, crossing Pennsylvania Route 442. After a few tenths of a mile, the stream reaches its confluence with Little Muncy Creek.

The watershed of Cox Run has an area of 1.20 square miles (3.1 km2). The stream is entirely within the United States Geological Survey quadrangle of Hugesville. Its mouth is located within 1 mile (1.6 km) of Clarketown.

Cox Run is classified as a Coldwater Fishery, like all of the other tributaries of Little Muncy Creek.

In 2008, Engineering District 3-0 of the Pennsylvania Department of Transportation applied for permission to carry out a bank stabilization project on Cox Run. The proposed project would stabilize approximately 593 feet (181 m) of embankment alongside State Route 2063 in Moreland Township, Wolf Township, and Muncy Creek Township, 1 mile (1.6 km) east of Clarketown. The project was intended to have no significant impact on the stream.

All content from Kiddle encyclopedia articles (including the article images and facts) can be freely used under Attribution-ShareAlike license, unless stated otherwise. Cite this article:
Cox Run Facts for Kids. Kiddle Encyclopedia.