Crab Orchard is a city in Cumberland County, Tennessee, United States. The population was 752 at the 2010 census.

Crab Orchard's position in a gap in the Crab Orchard Mountains made it an early "gateway" to the Cumberland area as early as the late 18th century. Pioneers passing through the area named it for its abundance of wild crab apple trees. In the 1780s, a road was built through the gap to help provide protection for travelers migrating from East Tennessee to the Nashville area.

The historian J. G. M. Ramsey reported several Cherokee, Creek, and Shawnee attacks at "the Crab-Orchard" during a period of heightened tensions between Native Americans and encroaching Euro-American settlers in the early 1790s. Around 1792, a small band of troops led by Captain Samuel Handley was attacked by a mixed group of Cherokee, Creek, and Shawnee at Crab Orchard, ending in Handley's capture. In April 1794, a group of travelers was ambushed by a band of Creeks, killing early Cumberland County settler Thomas "Big Foot" Spencer. A few weeks later, a "Lieutenant McClelland" was attacked and routed by a band of Creeks at Crab Orchard.

Franklin Industrial Minerals mine and plant in Crab Orchard

In the late 18th century, as Cherokee attacks subsided, the Walton Road was built as part of the stage road system connecting the Knoxville and Nashville areas. The road passed through Crab Orchard, bringing a steady stream of travelers and migrants to the area. Around 1800, Sidnor's Inn opened at Crab Orchard, with Bishop Francis Asbury being among its earliest guests. In 1827, Robert Burke, whose wife operated a tavern at what is now Ozone established the Crab Orchard Inn, which would remain open until the early 20th century.

Crab Orchard has given its name to a rare type of durable sandstone found in its vicinity. First used in local structures and sidewalks in the late 19th century, the Crab Orchard stone gained popularity in the 1920s when it was used in the construction of Scarritt College in Nashville. Numerous buildings in Crossville, have been constructed with Crab Orchard stone.

Crab Orchard is also home to a large limestone mine operated by Franklin Industrial Minerals. The mine and its accompanying plant dominate the south side of the Crab Orchard gap along Interstate 40 and US-70.

According to the United States Census Bureau, the city has a total area of 11.1 square miles (29 km2), all land. 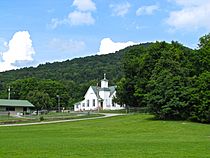 There were 345 households out of which 31.0% had children under the age of 18 living with them, 59.4% were married couples living together, 8.1% had a female householder with no husband present, and 28.7% were non-families. 26.4% of all households were made up of individuals and 9.3% had someone living alone who was 65 years of age or older. The average household size was 2.43 and the average family size was 2.93.

The climate in this area is characterized by hot, humid summers and generally mild to cool winters. According to the Köppen Climate Classification system, Crab Orchard has a humid subtropical climate, abbreviated "Cfa" on climate maps.

All content from Kiddle encyclopedia articles (including the article images and facts) can be freely used under Attribution-ShareAlike license, unless stated otherwise. Cite this article:
Crab Orchard, Tennessee Facts for Kids. Kiddle Encyclopedia.