Craig-y-nos Castle (English: Rock of the Night), is a Victorian-Gothic country house in Powys, Wales, United Kingdom. Built on parkland beside the River Tawe in the upper Swansea Valley, it is located on the southeastern edge of the Black Mountain. The castle, formerly owned by opera singer Adelina Patti, is now a boutique hotel, catering, conferencing and entertainment venue. Adjoining the castle are its landscaped grounds which now serve as a country park, managed separately by the Brecon Beacons National Park Authority.

The main building was built between 1841 and 1843 by Captain Rice Davies Powell, who became a county magistrate and a High Sheriff of Brecknock. It was said that his family were cursed thanks to their bloodline relationship with the Dutch Overbeek family of Calcutta and Cape Town, who Captain Powell had diddled out of an inheritance (see Dundee Evening Telegraph – Saturday 25 May 1901, page 3, column 5), with cholera taking his younger son in 1851, and the deaths of his wife and younger daughter before he died in 1862. In 1864 his eldest son was killed in a hunting accident on the Isle of Wight. This resulted in eldest daughter Sarah's inheriting the estate, and she moved in with her husband Captain Allaway. After Allaway died in 1875, Sarah moved to Tenby, before the property was sold in 1876.

After the estate entered into the trust of the Chancery, it was bought by Morgan Morgan of Abercrave for £6,000 in 1876. Mr Morgan and his family, plus his son also called Morgan Morgan and his family, lived jointly in the castle for several years. The family cleared a large plantation of 80-year-old fir trees which stood between the castle and the quarries above, which were said to be home to a local population of red squirrels. 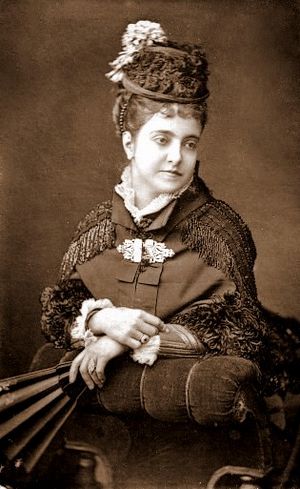 Adelina Patti purchased the castle and surrounding park land for £3500 in 1878, to develop it as her own private estate. The prima donna had reached the soaring heights of a spectacular career. She spent the rest of her life at Craig-y-nos, leaving it only to sing in the premier opera houses of Europe and to tour the United States, captivating the world with her flawless soprano voice.

After her second marriage, to French tenor Ernesto Nicolini, she embarked on a major building programme at the castle, adding the North and South wings, the clock tower, conservatory, winter garden and theatre. After making her last public appearance in October 1914, when she sang for the Red Cross and filled the Albert Hall, she spent the rest of her life at Craig-y-nos with her third husband and a devoted staff.

The Adelina Patti Theatre is a Grade I listed opera house. Built to be Patti's own private auditorium, it was designed by Swansea architects Bucknall and Jennings, with input from Sir Henry Irving. Briefed by Patti to be her miniature version of La Scala, Milan, it incorporates features from Wagner's Bayreuth Festspielhaus opera house in Bayreuth, and the Theatre Royal, Drury Lane, London.

At 40 feet (12 m) long, 26 feet (7.9 m) wide and 24 feet (7.3 m) high the auditorium was originally decorated in pale blue, cream and gold wall panels. Ten Corinthian columns support the ceiling, and in between these are the names of composers such as Mozart, Verdi and Rossini, all gilded and surmounted by Madam Patti's monogram. The stage area was originally fronted by blue silk curtains, with a back drop that illustrates Madam Patti riding in a chariot, dressed as Semiramide from the opera of the same name by Rossini. The design incorporates a mechanical auditorium floor which can be: raised level, for use as a ballroom; or sloped towards the stage, when in use as a theatre. The theatre incorporated an organ, given to Patti in the United States after one of her tours. This was dismantled in the 1920s when the buildings became a hospital.

Able to seat 150 people, the back of the theatre houses a gallery where the domestic staff would sit, enabling them to enjoy the performances. The orchestra pit is separated from the seating area by a balustrade, and holds up to 24 musicians.

Invitations for the July 12, 1891, opening event went to two types of guest: those invited to stay at the castle, and those invited just for the performance. House guests included: the Spanish Ambassador; Baron and Baroness Julius De Reuter, founder of the Reuters news agency; and Lord and Lady Swansea. Journalists from international newspapers including The Daily Telegraph, Le Figaro and the Boston Herald were also invited as house guests to report on the opening. Final rehearsals occurred in the afternoon with the Swansea Opera Company, before a specially chartered train arrived at Penwyllt with the performance guests. Due to start at 20:00, the performance eventually started at 20:30 after a light tea. Sir Henry Irving was to have given the opening address, but as he was unable to attend, leading actor William Terris deputised. Patti's performance included the prelude to act one of La traviata, and in the second half the Garden Scene from Faust. There then followed a buffet supper served in the conservatory, with a total of 450 bottles of champagne consumed at the party.

Today the theatre remains a time capsule, and the stage is probably the only surviving example of original 19th century backstage equipment. The opera house is licensed for weddings. 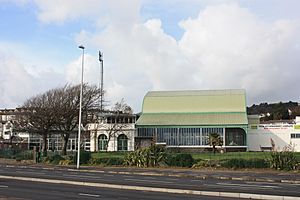 The winter garden is a spacious building with a soaring roof and made mainly from glass, where Patti would promenade with her guests among tropical plants, whilst exotic birds flew within.

A pair of wrought iron water fountains in the shape of Cranes were made in the local ironworks by a Mr Crane, who made decorative ironware featuring his namesake bird. Their multi-coloured plumage shed rainbow light from their falling waters, and were said to have captivated all who saw them.

As a result of World War I, in 1918, Patti presented her winter garden to the people of Swansea where it became the Patti Pavilion, and has since been restored on several occasions. One of the crane fountains stands in the forecourt of the castle, the other in the grounds of Swansea University.

Craig-y-nos was probably the first private house in Wales to be wired for electricity. The first in the UK was Cragside in Northumberland in 1880, a year after the invention of the electric light bulb by Thomas Edison. An Otto engine in the grounds created a 110 V DC system, with distribution provided by two bare copper wires placed in two adjacent grooves carved into a plank of wood, with a second plank placed over the top of it. This supplied power for Swan lamps throughout the castle, and an electrically powered Welte Concert Orchestrion which was operated by a perforated paper roll, situated in the French billiards room. The organ was the pride and joy of her second husband, French tenor Nicolini, thus dating installation prior to his death in 1898. Discovery and investigation into the system was only found by Mr J. A. Lea, the last Hospital Secretary.

The Neath and Brecon Railway Craig-y-nos railway station was in part funded by Patti. A private road was constructed from the castle to the station, where a lavishly furnished private waiting room was installed. In return the Neath and Brecon Railway was commissioned to provide Patti with her own private railway carriage, which she could request attached to any train to take her whenever, and wherever within the United Kingdom, she wanted to travel.

At the start of the 20th century, Patti had one of the first motor cars in Wales, and is reported to have raced a local doctor from Swansea to Abercrave for a small wager.

After Adelina Patti's death in 1919, the castle and the grounds were sold to the Welsh National Memorial Trust for £11,000 in March 1921, an organisation founded to combat tuberculosis in Wales. Reconstructed as a sanatorium and called the Adelina Patti Hospital at the request of her widower, it admitted its first patients in August 1922. In 1947, the children of Craig-y-nos were among the first in the UK to receive the first effective TB medicine, the antibiotic streptomycin. In 1959, it became a hospital for the elderly. After the transfer of remaining patients to the new Ystradgynlais Community Hospital, the castle closed as a hospital on 31 March 1986.

More information about Craig-y-nos' time as a TB hospital may be found in the book 'The Children of Craig-y-nos' by Ann Shaw and Carole Reeves. Clive Rowlands, a famous rugby player, was one of its patients, being admitted in 1947, as an eight-year-old. He was given a rugby ball as a gift and accidentally kicked it through a glass door, for which he was put in a straitjacket for a week.

In a project supported by the Heritage Lottery Fund, the Sleeping Giant Foundation charity, the Wellcome Trust Centre and University College of London, in 2007 an exhibition at the Welfare Hall, Ystradgynlais, showed relics and recorded recalls of patients from its time as a TB sanatorium.

The Welsh Office declared Craig-y-nos Castle and its unique theatre surplus to requirements soon after the opening of the new Community Hospital in nearby Ystradgynlais. In 1988 the Freehold of the property was sold to a consortium of businessmen who formed the Craig-y-nos Castle Company Ltd. After a long period of repair and restoration, the castle opened to the public as a functions venue but was badly hit by the economic recession of the early 1990s. Craig-y-nos Castle was then sold to (medical) Doctor John Trevor Jones and his wife Penelope, who continued the essential repair work including the complete renewal of the theatre's courtyard doors, installation of new central-heating system, re-roofing the theatre and much more, while organising national antiques fairs, musical events and wedding receptions – all to generate income to plough back into the rescue of Patti's castle. On reaching retirement age in October 2000 they sold Craig-y-nos to SelClene Ltd. SelClene continued the restoration, and opened the castle as a hotel.

In 2005, the castle featured in the BBC Doctor Who episode Tooth and Claw, featuring David Tennant as the Doctor and Billie Piper as Rose Tyler. The Torchwood crew later stayed at this hotel and filmed some scenes when filming Countrycide.

The castle is said to be subject to strong paranormal phenomena and haunted by the ghosts of Patti; her second husband, French tenor Nicolini; and the object of her affection, the composer Rossini. Unexplained presences taking many different forms have allegedly been experienced by visitors all over the castle. Nurses who worked at Craig-y-nos while it was a hospital have reported many presences and frequent reports of having walked past somebody on the stairs or corridor but nobody being there, as well as many unexplained noises and sounds of footsteps. Visitors have also reported experiencing breathing difficulties and of feeling a lingering presence of patients who were hospitalized there while suffering from tuberculosis.

The Top Children's Ward is the most active room in the castle. With the recovery rate of TB being so low, many children entered the castle at an extremely young age and never left. Many full apparitions have allegedly been seen in this room and some investigators claim to have interacted on numerous occasions, although no evidence has been produced to justify the claims. Again, minor anomalies are regular occurrences, along with the sounds of children's footsteps, bouncing balls and giggles.

An investigation of an alleged dark semi-transparent lady on the stairs was discovered to be that of a statuette, situated on the roof of the castle which casts a shadow that resembles a lady when the sun starts to set. The building was also subject to an investigation on Living TV's Most Haunted.

All content from Kiddle encyclopedia articles (including the article images and facts) can be freely used under Attribution-ShareAlike license, unless stated otherwise. Cite this article:
Craig-y-Nos Castle Facts for Kids. Kiddle Encyclopedia.