Crossover Peak is a 2,175-metre (7,136-foot) mountain summit located in the Cascade Mountains of southwestern British Columbia, Canada. It is situated 4.5 km (3 mi) north of the Canada–United States border, 1.6 km (1 mi) southeast of Mount MacFarlane, and 2 km (1 mi) north-northwest of Slesse Mountain, which is its nearest higher peak. Precipitation runoff from the peak drains into Slesse Creek and Nesakwatch Creek, both tributaries of the Chilliwack River. The mountain's name was submitted by Glenn Woodsworth of the Alpine Club of Canada based on the popular cross-over hike from the Pierce Lake trail to the Slesse trail on opposite sides of the peak. The name was officially adopted on May 21, 1981, by the Geographical Names Board of Canada.

Crossover Peak is related to the Chilliwack batholith, which intruded the region 26 to 29 million years ago after the major orogenic episodes in the region. This is part of the Pemberton Volcanic Belt, an eroded volcanic belt that formed as a result of subduction of the Farallon Plate starting 29 million years ago. 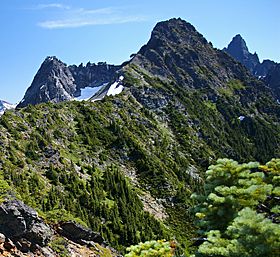 Based on the Köppen climate classification, Crossover Peak is located in the marine west coast climate zone of western North America. Most weather fronts originate in the Pacific Ocean, and travel east toward the Cascade Range where they are forced upward by the range (Orographic lift), causing them to drop their moisture in the form of rain or snowfall. As a result, the Cascade Mountains experience high precipitation, especially during the winter months in the form of snowfall. Temperatures can drop below −20 °C with wind chill factors below −30 °C. The months July through September offer the most favorable weather for climbing Crossover Peak.

All content from Kiddle encyclopedia articles (including the article images and facts) can be freely used under Attribution-ShareAlike license, unless stated otherwise. Cite this article:
Crossover Peak Facts for Kids. Kiddle Encyclopedia.