The culture of Missoula, Montana is greatly influenced by the nearby University of Montana in art, sports, and music with the city's location in a mountain river valley also encouraging outdoor events and recreation.

Missoula has a thriving arts scene. The Big Sky Documentary Film Festival, the largest film event in Montana, takes place each February and showcases over 100 non-fiction films from around the world. The International Wildlife Film Festival, is held annually at the historic Wilma Theatre. The Missoula Children's Theatre is an international touring program that visits nearly 1,000 communities per year. The Children's Theatre routinely has residencies in all fifty states, Canada, Japan, Germany, Italy, and many other countries. The Missoula Art Museum; exhibits a variety of contemporary art. The museum was founded in 1975, and in 2005 the facilities were renovated and expanded. The museum offers art classes, tours, gallery talks, and has free admission.

The city is frequently mentioned in novels of Ernest Hemingway, Stephen Frey, Chuck Palahniuk, James Lee Burke, James Crumley, and former resident Norman Maclean. In his novel, A River Runs Through It, Maclean wrote that "The world is full of bastards, the number increasing rapidly the further one gets from Missoula, Montana."

Missoula is home to a diverse and influential music scene. Members of bands such as Deranged Diction (Jeff Ament), which formed in Missoula, later moved to Seattle and became key members of groups such as Green River, Mother Love Bone, Pearl Jam, Silkworm, and Love Battery, playing an important role in the birth of the grunge movement. The city is prominently featured in "Apology Song" by Oregon indie-band The Decemberists. Prior to moving to Portland, The Decemberists frontman Colin Meloy studied at the University of Montana, where he formed a band named Tarkio. Wantage Record hosts Totalfest, a yearly diy music festival featuring local and touring acts, in Missoula that ended in 2015 after 14 years.

Missoula is home to a variety of museums and galleries with most located in the Downtown and University districts.

The Montana Museum of Art & Culture (MMAC), based at the University of Montana and formerly known as the Museum of Fine Arts, is one Montana's oldest cultural reserves with its permanent collection of more than 10,000 original works begun in 1894. MMAC officially became a state museum in 2001 with its mission to "acquire and preserves art that expresses the spirit of the American West and its relationship to the larger world."

Both founded in 1975, the Missoula Art Museum (MAM) and The Historical Museum at Fort Missoula are Missoula's only two museums accredited by the American Alliance of Museums. MAM 's contemporary art collection is housed in a former Carnegie library built by A.J. Gibson in 1903 with a modern-style 2006 addition. Historic Fort Missoula is home to the Historic Museum which collects and preserves artifacts related to the history of Missoula County, Fort Missoula, and timber industry in western Montana. The fort also holds the Rocky Mountain Museum of Military History. and the Northern Rockies Heritage Center

The SpectrUM Discovery Area is a hands-on science discovery center operated by the University of Montana. The Montana Natural History Center is a nature center and museum that features exhibits and an art gallery about the ecosystem and natural history of Western Montana. It is located next to McCormick Park.

The Museum of Mountain Flying, located near the Missoula International Airport, features historic aircraft used in mountain flying and smokejumping, as well as photos and historic memorabilia.

Also related to the region's timber history, in 2009 it was announced that the National Museum of Forest Service History plans to build a National Conservation Legacy and Education Center in Missoula.

In addition to the MAM and MMAC, Missoula is home to an array of other art galleries located downtown. This includes the Monte Dolack Gallery featuring works from Montana artists Monte Dolack and Mary Beth Percival. Both attended the University of Montana and celebrate the region's natural beauty. Monte Dolack in particular often includes local animal species in a whimsical natural or artificial setting. The Murphy-Jubb Fine Art gallery features the watercolor paintings of another University of Montana alumni, Kendal Jan Jubb, in addition to oil paintings of Marshall Noice, and ceramic sculptures of James Hewes. Also located downtown are the Artists' Shop, a cooperative, local artist-run gallery showcasing a wide variety of art and media; the Dana Gallery which represents over forty Montana artists; the photography dedicated Gallery Santonge; Studio D Gallery of M. Scott Miller, and The Brink Gallery which intentionally cannot be narrowly defined.

Missoula is located near the Rattlesnake Wilderness and Rattlesnake National Recreation Area, two areas that protect Missoula's municipal watershed and serve as wildlife habitat and recreational areas. The Forest Service's smokejumper base, the largest of its kind, is located near the Missoula airport. Free tours of the base are popular with tourists during the summer wildfire season. A walking bridge over the downtown yards of the Montana Rail Link railroad is a popular destination for railfans.

In April, 2011, the National Park Service officially recognized the Westside Railroad District, adding it to the National Register of Historic Places. This addition once again expands Missoula's Downtown Historic District, after the February, 2011 addition of Free Speech Corner at Higgens Avenue and West Front Street. Free Speech Corner commemorates the free speech fights of the Industrial Workers of the World, a union formed in 1905 which sought to organize timber, lumber and mining workers into one worldwide union. 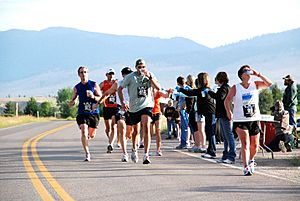 Missoula's location in a river valley surrounded by mountains on all sides as well as its history has had a great influence on the development of the city's parks and recreation activities. Today the city boasts over 400 acres of parkland, 22 miles of trails, and nearly 5000 acres of open-space conservation land. Located at the confluence of three rivers (the Clark Fork, Bitterroot, and Blackfoot), the area is also popular for white water rafting and, thanks largely to the novel and subsequent film A River Runs Through It by Missoula-native Norman Maclean, is well known for its fly fishing. Additionally, Missoula has two aquatic parks, multiple golf courses, is home to the Adventure Cycling Association, and hosts what Runner's World called the "best overall" marathon in the nation. With no recreational additions, the nature park has long been considered a wonderful place for birdwatching with over 100 different species that can be frequently sighted from the Bolle Birdwatching trail.

A system of public parks was developed in Missoula in 1902 with the donation of 42 acres along the Rattlesnake Creek for Greenough Park by lumber baron Thomas Greenough and his wife Tessie. They simply asked that "the land forever be used as a park and for park purposes to which the people of Missoula may during the heated days of summer, the beautiful days of autumn, and the balmy days of spring find a comfortable, romantic and poetic retreat" with a follow-up nine years later in a letter to the Missoulian stressing his interest in having the park remain in as close to a native state as possible. Today, that request along with the discovery that non-native Norway Maples were inhibiting the growth of native trees and shrubs such as cottonwoods, ponderosa pines, Rocky Mountain maples led to the controversial decision to remove the beautiful, yet invasive tree from the park with the hope of returning it to its natural state.

In 1924, Bonner Park was created out of John L. Bonner's estate near the university. The park today has multiple athletic fields and courts in addition a band shell used by the Missoula City band through the summer. The Kiwanis club set up a park downtown in 1934, making Kiwanis Park the first of a string of parks that today lines both sides of the Clark Fork River. One of those parks on the southern bank of the river is McCormick Park, which was created with WPA funds out of surplus highway land, a parcel from the American Hide and Fur Company, and land donated from its namesake, the Kate McCormick estate. The 26-acre park is home to a skate park, aquatics center, a free bike check-out and a children's fishing pond.

Caras Park, located just south of the historic Wilma Theatre downtown, was created as a result of a land reclamation project done as the state highway department replaced the aging, two-lane Higgins Avenue Bridge in 1962 with the current four-lane structure. Before the reclamation, the Clark Fork River divided to create an island with the north channel's bank extending to nearby buildings such as the Wilma Theatre. The south channel was deepened for the increased water flow and the infilled land later became Caras Park. Events in the park were not common until the early 1980s and permanent fixtures like Out to Lunch that began in 1986. The Missoula Downtown Association took over from Parks and Recreation for management of the park and made improvements to make Caras Park more event friendly. Seating, event circles, brick plazas, restrooms, and storage structures were added. Large temporary tents were used for events until 1997 when a permanent Caras Park Pavilion was constructed. With its centralized, waterfront location the park has become the hub of Missoula's festivities. These include Out to Lunch, the International Wildlife Film Festival, First Night Missoula, Garden City BrewFest and offered intimate concert settings for artists such as Jewel, Chris Isaak, Santana, Ziggy Marley, and B.B. King.

Located next to Caras Park is A Carousel for Missoula, a wooden, hand-carved and volunteer-built carousel; and Dragon Hollow, a magical play land adjacent to the carousel.

Missoula is an outdoor enthusiast's paradise throughout the entire year. Throughout the year, activities like alpine and rock climbing, skiing, hiking, biking, golf and fly fishing are available. Missoula is the whitewater rafting and kayaking capitol of Montana because of its proximity to Idaho's crown jewels and multiple year round runs. Missoula is also on the forefront of river surfing, largely due to the man made surf wave in the center of town, Brennan's Wave.

Missoula is a focal point of bicycle travel, because of the presence of Adventure Cycling Association, North America's largest cycling membership organization. Thousands of cyclists come through Missoula and stop at Adventure Cycling's downtown headquarters (in a former church at 150 E. Pine Street) for free ice cream, advice, and the chance to be photographed.

All content from Kiddle encyclopedia articles (including the article images and facts) can be freely used under Attribution-ShareAlike license, unless stated otherwise. Cite this article:
Culture in Missoula, Montana Facts for Kids. Kiddle Encyclopedia.