Culture of Kentucky facts for kids 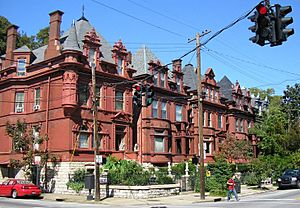 Old Louisville is the largest Victorian Historic neighborhood in the United States.

Although Kentucky's culture is generally considered to be Southern, it is unique in that it is also influenced by the Midwest and Southern Appalachia in certain areas of the state. The state is known for bourbon and whiskey distilling, tobacco, horse racing, and college basketball. Kentucky is more similar to the Upper South in terms of ancestry which is predominantly American (meaning that only this ancestry was specified by respondents to the US Census). Nevertheless, during the 19th century, Kentucky did receive a substantial number of German immigrants, who settled mostly in the Midwest, along the Ohio river primarily in Louisville, Covington, and Newport. Only Maryland, Delaware, and West Virginia have higher German ancestry percentages than Kentucky among Census-defined Southern states, although Kentucky's percentage is closer to Virginia's than the previously named state's percentages. Kentucky was a slave state, and blacks once comprised over one-quarter of its population. However, it lacked the cotton plantation system and never had the same high percentage of African Americans as most other slave states. With less than 8% of its current population being black, Kentucky is rarely included in modern-day definitions of the Black Belt, despite a relatively significant rural African American population in the Central and Western areas of the state. Kentucky adopted the Jim Crow system of racial segregation in most public spheres after the Civil War, but the state never disenfranchised African American citizens to the level of the Deep South states, and it peacefully integrated its schools after the 1954 Brown v. Board of Education verdict, later adopting the first state civil rights act in the South in 1966.

The biggest day in horse racing, the Kentucky Derby, is preceded by the two-week Kentucky Derby Festival in Louisville. Louisville also plays host to the Kentucky State Fair and the Kentucky Shakespeare Festival. Owensboro, Kentucky's third largest city, gives credence to its nickname of "Barbecue Capital of the World" by hosting the annual International Bar-B-Q Festival. Bowling Green, Kentucky's fourth largest city and home to the only assembly plant in the world that manufactures the Chevrolet Corvette, opened the National Corvette Museum in 1994.

Old Louisville, the largest historic preservation district in the United States featuring Victorian architecture and the third largest overall, hosts the St. James Court Art Show, the largest outdoor art show in the United States. The neighborhood was also home to the Southern Exposition (1883–1887), which featured the first public display of Thomas Edison's light bulb, and was the setting of Alice Hegan Rice's novel, Mrs. Wiggs of the Cabbage Patch and Fontaine Fox's comic strip, the "Toonerville Trolley.

The more rural communities are not without traditions of their own, however. Hodgenville, the birthplace of Abraham Lincoln, hosts the annual Lincoln Days Celebration, and will also host the kick-off for the National Abraham Lincoln Bicentennial Celebration in February 2008. Bardstown celebrates its heritage as a major bourbon-producing region with the Kentucky Bourbon Festival. (Legend holds that Baptist minister Elijah Craig invented bourbon with his black slave in Georgetown, but some dispute this claim.) Glasgow mimics Glasgow, Scotland by hosting the Glasgow Highland Games, its own version of the Highland Games, and Sturgis hosts "Little Sturgis", a mini version of Sturgis, South Dakota's annual Sturgis Motorcycle Rally. The residents of tiny Benton even pay tribute to their favorite tuber, the sweet potato, by hosting Tater Day. Residents of Clarkson in Grayson County celebrate their city's ties to the honey industry by celebrating the Clarkson Honeyfest. The Clarkson Honeyfest is held the last Thursday, Friday and Saturday in September, and is the "Official State Honey Festival of Kentucky."

Colonel Harland Sanders, founder of Kentucky Fried Chicken, is one of the most highly recognized figures in the world. Laurel County, Kentucky, located in the heart of the beautiful Daniel Boone National Forest, is proud to be the home of the Colonel's first and original restaurant established in the 1940s. Lee Cummings, co-founder of Lee's Famous Recipe Chicken, also began his career in 1952 with his uncle, Colonel Sanders, in Laurel County. The Annual World Chicken Festival is a tribute to this heritage. The international celebration, the last full weekend of every September, is held in beautiful downtown London. Entertainment for four fun filled day makes this one of Kentucky's largest festivals

Renfro Valley, Kentucky is home to Renfro Valley Entertainment Center and the Kentucky Music Hall of Fame and is known as "Kentucky's Country Music Capital," a designation given it by the Kentucky State Legislature in the late 1980s. The Renfro Valley Barn Dance was where Renfro Valley's musical heritage began, in 1939, and influential country music luminaries like Red Foley, Homer & Jethro, Lily May Ledford & the Original Coon Creek Girls, Martha Carson, and many others have performed as regular members of the shows there over the years. The Renfro Valley Gatherin' is today America's second oldest continually broadcast radio program of any kind. It is broadcast on local radio station WRVK and a syndicated network of nearly 200 other stations across the United States and Canada every week.

Contemporary Christian music star Steven Curtis Chapman is a Paducah native, and Rock and Roll Hall of Famers The Everly Brothers are closely connected with Muhlenberg County, where older brother Don was born. Kentucky was also home to Mildred and Patty Hill, the Louisville sisters credited with composing the tune to the ditty Happy Birthday to You in 1893; Loretta Lynn (Johnson County), and Billy Ray Cyrus (Flatwoods). However, its depth lies in its signature sound — Bluegrass music. Bill Monroe, "The Father of Bluegrass", was born in the small Ohio County town of Rosine, while Ricky Skaggs, Keith Whitley, David "Stringbean" Akeman, Louis Marshall "Grandpa" Jones, Sonny and Bobby Osborne, and Sam Bush (who has been compared to Monroe) all hail from Kentucky. The International Bluegrass Music Museum is located in Owensboro, while the annual Festival of the Bluegrass is held in Lexington.

Kentucky is also home to famed jazz musician and pioneer, Lionel Hampton (although this has been disputed in recent years). Blues legend W.C. Handy and R&B singer Wilson Pickett also spent considerable time in Kentucky. The pop bands Midnight Star and Nappy Roots were both formed in Kentucky, as were country acts The Kentucky Headhunters, Montgomery Gentry and Halfway to Hazard, as well as Dove Award-winning Christian groups Audio Adrenaline (rock) and Bride (metal). 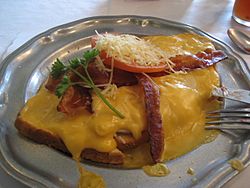 The Hot Brown was first served at Louisville's Brown Hotel

Kentucky's cuisine is generally similar to traditional southern cooking. Although in some areas of the state it can blend elements of both the South and Midwest. One original Kentucky dish is called the Hot Brown, a dish normally layered in this order: toast, turkey, bacon, tomatoes and topped with mornay sauce. It was developed at the Brown Hotel in Louisville. The Pendennis Club in Louisville is the birthplace of the Old Fashioned cocktail. Also, western Kentucky is known for its own regional style of barbecue.

All content from Kiddle encyclopedia articles (including the article images and facts) can be freely used under Attribution-ShareAlike license, unless stated otherwise. Cite this article:
Culture of Kentucky Facts for Kids. Kiddle Encyclopedia.