Daniel of Galicia facts for kids

Daniel of Galicia is mentioned as King Daniel of Rus' by Giovanni da Pian del Carpine in his History of Mongols whom we call Tatars (possibly, a wrong spelling of Batoros) (Ystoria Mongalorum quos nos Tartaros appellamus).

He was also known as Danylo Romanovych. In 1205, after the death of his father, Roman II Mstyslavich, the ruler of Galicia–Volhynia, the boyars of Galicia forced the four-year-old Daniel into exile with his mother Anna of Byzantium and brother Vasylko Romanovich. After the boyars proclaimed one of their own as prince in 1213, the Poles and Hungarians invaded the principality, ostensibly to support the claims of young Daniel and Vasylko, and divided it between themselves. In 1219, he renounced his claims to Galicia in favor of his father-in-law Mstislav the Bold.

In 1221, Daniel re-established his rule over Volhynia, where the boyars and populace had remained loyal to his dynasty [highly dubious]. In 1234, he defeated Alexander Vsevolodovich, taking the Duchy of Belz. By 1238, he had defeated the Dobrzyń Knights, and regained most of Galicia, including the capital at Galicia. While the Prussians were under pressure from the Teutonic Order, Daniel attempted to conquer the related Yatvingians.

The following year, with the advancing Mongols, the Grand Prince of Kiev Michael who was married to the Daniel's sister ran out of Kiev and asked Daniel for help. Daniel dispatch his voivode Dmytro to defend the city. However, after a long siege its walls were breached and despite fierce fighting within the city, Kiev fell on 6 December 1240 and was largely destroyed. A year later, the Mongols passed through Galicia and Volhynia while campaigning against the Poles and Hungarians, destroying Galicia. On 17 August 1245, Daniel defeated a combined force of the Prince of Chernihiv, disaffected boyars, and Hungarian and Polish (see also Order of Dobrin) elements at Yaroslav and finally took the remainder of Galicia, thus reconstituting his father's holdings. He made his brother Vasylko ruler of Volhynia and retained the Galician title for himself, though he continued to exercise real powers in both places. 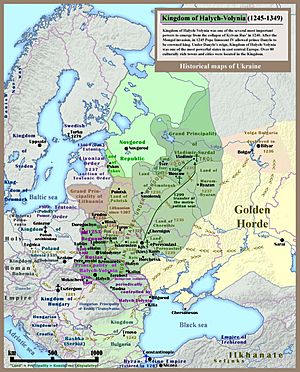 Territorial boundaries of the Kingdom of Galicia–Volhynia (1245-1349).

Daniel's domestic policies focused on stability and economic growth. During his rule, German, Polish, and Rus' merchants and artisans were invited into Galicia, and numbers of Armenians and Jews established themselves in the towns and cities. Daniel founded the towns of Lviv (1256) (naming the former for his son) and Kholm, and fortified many others. He appointed officials to protect the peasantry from aristocratic exploitation and formed peasant-based heavy infantry units.

Yet Daniel's successes and his failed defense of Kiev attracted the further attention of the Mongols. In 1246, he was summoned to the capital of the Golden Horde at Sarai on the Volga River and was forced to accept Mongol overlordship. According to the Ukrainian historian Orest Subtelny, Daniel was handed a cup of fermented mare's milk by the Mongol khan Batu and told to get used to it, as "you are one of ours now." They exchanged hostages whereby 100 families of Keraites were re-settled in Carpathian Galicia. According to James Chambers the following dialogue took place between Batu and Daniel of Galicia: At a banquet Batu asked if he drank kumiz like the Mongols and Daniel answered: "Until now I did not, but now I do as you command and I drink it." To which Batu replied: "You are now one of ours," and since he was more used to it ordered that Daniel be given a goblet of wine.

While formally accepting the Mongols as overlords, and supplying them with soldiers as required, Daniel built a foreign policy around opposition to the Golden Horde. He established cordial relations with the rulers of Kingdom of Poland and Kingdom of Hungary, and requested aid from Pope Innocent IV in the form of a crusade. In return for papal assistance, Daniel offered to place his lands under the ecclesiastical authority of Rome, a pledge never realized. Wooed by the prospect of extending his authority, the pope encouraged Daniel's resistance to the Mongols and his Western orientation, and in 1253, had a papal representative crown Daniel at Dorohochyn on the Bug River. Danylo wanted more than recognition, however, and commented bitterly that he expected an army when he received the crown. The following year, Daniel repelled Mongol assaults led by Orda's son, Kuremsa, on Ponyzia and Volhynia and dispatched an expedition with the aim of taking Kiev. Despite initial successes, in 1259, a Mongol force under Burundai and Nogai Khan entered Galicia and Volhynia and offered an ultimatum: Daniel was to destroy his fortifications or Burundai would assault the towns. Daniel complied and pulled down the city walls. 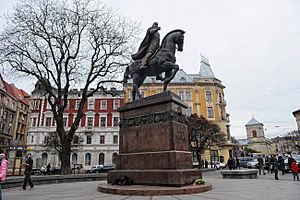 Monument of King Danylo in Lviv.

In the last years of his reign, Daniel engaged in dynastic politics, marrying a son and a daughter to the offspring of Mindaugas of Grand Duchy of Lithuania and acquiring territorial concessions in Poland from the latter. Another daughter of his, Ustynia, was married to Prince Andrey Yaroslavich of Vladimir-Suzdal. He also arranged for the marriage of his son Roman to Gertrude, the Babenberg heiress, but was unsuccessful in his bid to have him placed on the ducal throne of Austria.

By his death in 1264, Daniel had reconstructed and expanded the territories held by his father, held off the expansionist threats of Poland and Hungary, minimized Mongol influence on Western Ukraine, and raised the economic and social standards of his domains. He was succeeded in Galicia by his son Lev.

A monument to him was erected in 2001 in Lviv. Another one is in Halych.

Lviv Danylo Halytskyi International Airport is named after him.

Danylo Halytsky Lviv National Medical University One of the Oldest and Prime Medical Institute of Ukraine is named after him.

On 7 September 2011 the parliament of Ukraine (Verkhovna Rada) issued a resolution on "celebration of the 810th Anniversary of the birth of the first King of Ruthenia-Ukraine Daniel of Galicia".

All content from Kiddle encyclopedia articles (including the article images and facts) can be freely used under Attribution-ShareAlike license, unless stated otherwise. Cite this article:
Daniel of Galicia Facts for Kids. Kiddle Encyclopedia.