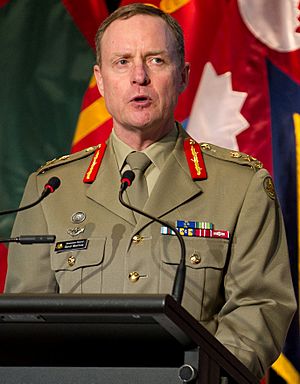 David Lindsay Morrison AO (born 24 May 1956) is a retired Australian senior army officer. He served as the Australian Army's Chief of Army from June 2011 until his retirement in May 2015. He was a lieutenant general. He is also known for his work towards gender equality and diversity. He was named Australian of the Year in 2016.

Morrison was born in Cairns, Queensland. His father was Major General Alan Morrison (1927–2008).

All content from Kiddle encyclopedia articles (including the article images and facts) can be freely used under Attribution-ShareAlike license, unless stated otherwise. Cite this article:
David Morrison Facts for Kids. Kiddle Encyclopedia.