Canungra is a small rural township in the Scenic Rim Region local government area of South East Queensland, Australia. Its economy depends on tourism, being a popular destination for short drives from the Gold Coast and Brisbane. Canungra, also called the "Valley of the Owls", is situated in the Gold Coast hinterland, 35 kilometres (22 mi) west of the Gold Coast and 90 kilometres (56 mi) south of Brisbane. At the 2011 census, Canungra had a population of 746.

One of the origin of the town's name comes from the Aboriginal word for small owls, "Caningera". The most notable owl found in the area is the southern boobook owl, which appears in various logos and symbols associated with Canungra. In 2005, the local Post Office released a special limited-release frank featuring Canungra and the boobook owl. However the word Cunungra comes from the Yugambeh word gungunga meaning "a long flat or clearing".

Residents and business in Canungra get their water supply from Canungra Creek, a tributary of Albert River. The slopes around Canungra are steep and forested with some cleared farmlands and rural homes in the flatter valley areas.

Canungra Post Office opened by May 1907 (a receiving office had been open from 1888, known at first as Canningera Creek).

Canungra owes its existence to the timber industry and once boasted one of the largest stands of timber in the colony. David Lahey, the father of Romeo Lahey, owned one of Queensland's largest sawmills at Canungra (Lahey's Canungra Sawmill). By the 1940s most of the timber had been cut and sawmills were closing. The historic Laheys Tramway Tunnel is the only remnant of the past sawmilling activities in the area. Following this logging era came beef cattle and dairying.

From 2 July 1915 until 1 July 1955 the Canungra railway line ran from the Beaudesert line at Logan Village to Canungra. 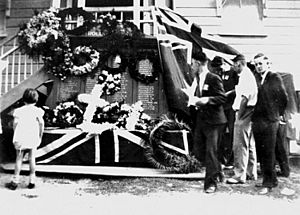 Honour Board at the School of Arts, Anzac Day 1937 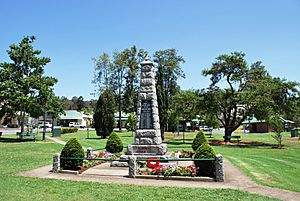 On 25 April 1938, the Canungra War Memorial was unveiled by Member of the Queensland Legislative Assembly for Fassifern, Adolph Gustav Muller.

Canungra has a number of heritage-listed sites, including:

The nearby locality of Witheren is the location of a large military establishment called the Kokoda Barracks within the Canungra Military Area, which includes the Land Warfare Centre. It was established during World War II and revived in 1954 to train personnel for the South East Asia Treaty Organization (SEATO) commitment in Malaya and on through to the end of the Vietnam War. The base provides a substantial permanent resident population as well as an ever-changing transient population due to the extensive ongoing training courses on offer at the base.

All content from Kiddle encyclopedia articles (including the article images and facts) can be freely used under Attribution-ShareAlike license, unless stated otherwise. Cite this article:
Canungra, Queensland Facts for Kids. Kiddle Encyclopedia.