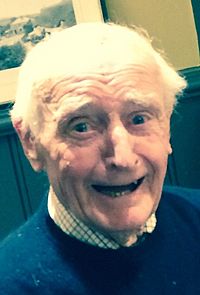 David Joseph Walsh (28 April 1923 – 14 March 2016), commonly referred to as Davy Walsh or Dave Walsh, was an Irish footballer. He was born in Waterford, Ireland.

He played as a centre forward for, among others, Linfield, West Bromwich Albion and Aston Villa. Walsh was a dual international. He played for both Ireland teams – the FAI XI and the IFA XI.

In 1949, he was a member of the FAI XI that defeated England 2–0 at Goodison Park, becoming the first team to beat England at home.

All content from Kiddle encyclopedia articles (including the article images and facts) can be freely used under Attribution-ShareAlike license, unless stated otherwise. Cite this article:
Davy Walsh Facts for Kids. Kiddle Encyclopedia.